Scholarship Winner: The Scope of the First Amendment in Modern Times

Home > Accident and Injury Blog > About Us > 2020 Scholarship Winner 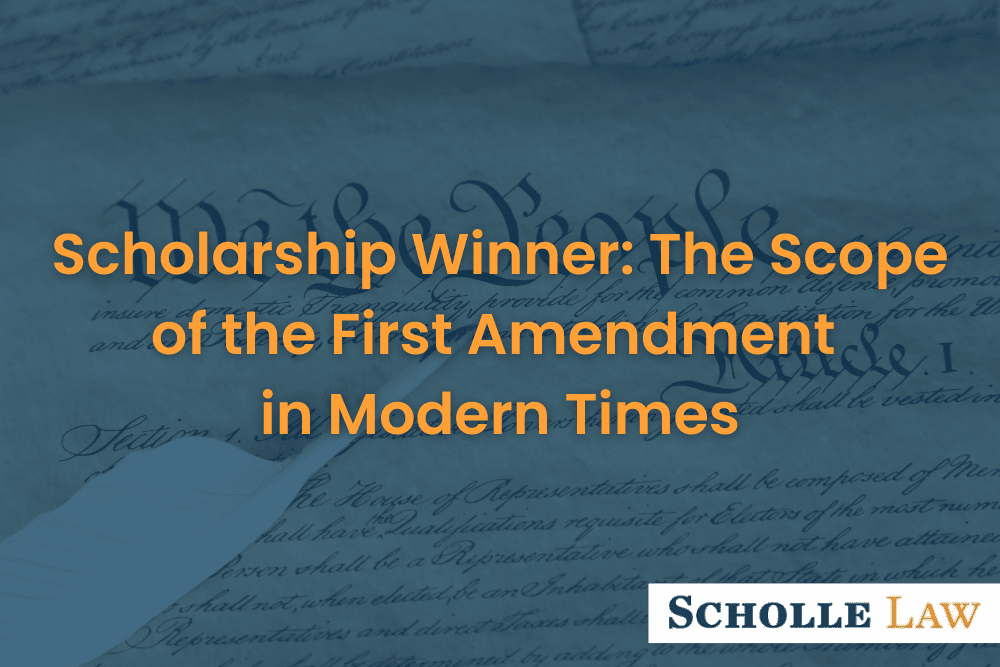 These first 3 words set the tone for the entire foundational document of our nation’s founding — the United States Constitution. In total, the Constitution has 27 amendments that protect the rights of every American.

Congress shall make no law respecting an establishment of religion, or prohibiting the free exercise thereof; or abridging the freedom of speech, or of the press; or the right of the people peaceably to assemble, and to petition the government for a redress of grievances.

Here at Scholle Law, we believe this amendment is particularly important because the right “to petition the government for a redress of grievances” includes the right to seek relief for a wrong act through litigation or other government action, as many constitutional scholars and jurists have concluded.

But let’s face it, today’s society looks much different than it did for the Founding Fathers. So how far should First Amendment protections go, and should it be expanded, limited or left alone?

We naturally have our own opinions and thoughts on this controversial subject, but we decided to embody the spirit of the Constitution by posing this question to the people — in particular, college students — by sponsoring a privately funded scholarship essay contest.

We were thrilled to receive a number of perceptive and thoughtful entries, which made it difficult to select a single winner for our $1,000 scholarship prize. In the end, we selected Rachel Wong as our winner. Rachel is a first-generation college student majoring in economics at The City College of New York.

What should be the scope of the first amendment in today’s society? Should it be expanded, curtailed or left alone, and why?

The first amendment should be left alone in today’s society with the thought that these amendments intend to provide general guidelines in what citizens can and cannot do, and that in some ways, they’re intended to be violated. These amendments, whether they’re intended to be timeless or not, serve as reminders of checked behavior and truly operate under the faith that all citizens will abide by them. There will always be situations where citizens don’t which is why we have an entire legal system, and there may be times where citizens seem to scratch the surface of the amendment by violating it but it deems unclear. The argument is that even if the scope of the amendment were to be changed, society will continue to find fault in it. Thus, is there any plausible way that the amendment can please all timelessly? The answer is no, which makes the thought of changing the first amendment in any way a worthless one. There will always be changing times that beg for updated amendments but if that were to be a reality, then America loses its basic premise of a democracy that respects all citizens. It’d change to increasingly accommodate the influential, such that the basic components of American democracy will be gone. Who knows what will be the next American concern begging for a change?

A good example in which the first amendment meets opposers who believe in a necessary change is the repeated accusation that President Donald Trump threatens free speech. President Donald Trump frequently labels the media as “fake news” that is the enemy of the American people, and he is free of legal consequence as he is protected by the first amendment. He has the right of free speech. At the same time, part of society believes that President Trump uses his presidential power to threaten free speech, by punishing those that are in disagreement with him. To put this in simpler terms with neglect that Donald Trump is president, the thought that this person threatens free speech is equivalent to the thought that one should not have an opinion. To be in perfect adherence to the first amendment under the eyes of all American citizens, it means that there should be no judgment on what the media is like. It also implies that this person should have no need to fix or improve anything because having a perspective on what something is like is a threat to that something. This point of view indicates that any American citizen and American government needs to be objective in their perception of all in order to entertain free speech and not restrict others to free speech. All of this can clearly be an escalated perception, even somewhat misinformed, of the situation but that’s the key. The first amendment is left up to interpretation, regardless of how it’s worded, what scope it expands to, who wrote it, and any other factor. Everything is up to interpretation. How can there be an amendment that best serves all when times are constantly changing, people are constantly changing, and interpretations of the amendment are constantly changing? 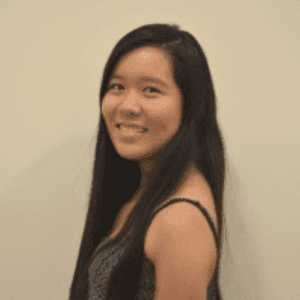 Rachel Wong is a first-generation college student majoring in economics, while also highly passionate about psychology. Rachel thrives when leading and mentoring first-generation students, as she frequently markets professional development events to students at her school, The City College of New York. She finds joy in holding 30-minute Q&A’s for a class of 30 students, as she teaches them the importance of professional skills like networking.

Rachel discovered the power of leadership and mentorship after five years of intensive professional and personal training with professors at her university and professionals at her fellowship, America Needs You. With the skills that dozens of mentors have taught her, she broke into Wall Street when she won an internship with Bank of America. Consequently, Rachel dreams to be the leader of a global financial corporation, where she can apply her experiences, use her psychology skills, and give back to her community on a larger scale.

The Scholle Law team would like to congratulate Rachel and thank everyone who participated in our scholarship essay contest for their thoughtful contributions. Keep working hard in school, and be sure to revisit our Scholarship page for future scholarship opportunities.