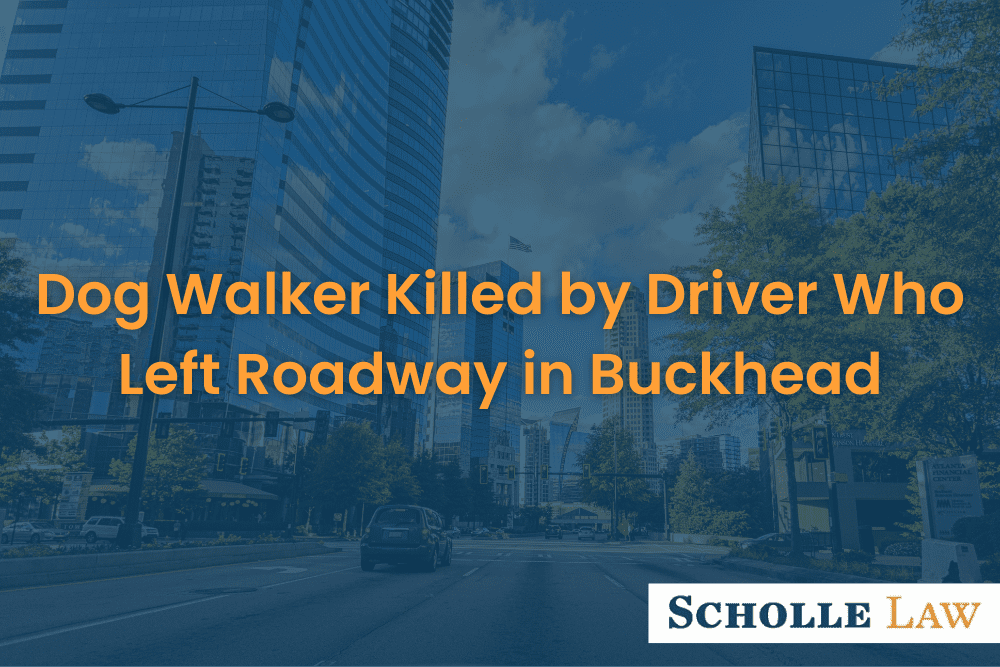 A driver struck and killed a man who was out walking his dog in the Buckhead area of Atlanta on September 29, the Atlanta Journal-Constitution reported.

Sheridan Lowe, 51, was near the intersection of Colonial Homes Drive and North Colonial Homes Circle when Robert Cliffton Thomas Jr., 56, struck him.

Witnesses told Fox 5 Atlanta that Thomas was driving a Honda Civic erratically before the crash, hitting at least 2 parked cars before veering onto the sidewalk and hitting Lowe, of Brookwood Valley Circle. The victim was dragged with the vehicle until Thomas hit an apartment building. Emergency workers pronounced Lowe dead at the scene around 11 p.m.

According to reports, neighbor Case Brittain was also walking his dog when he saw Thomas’s car “hit a pretty big boulder and split it in half.” Brittain said the vehicle became airborne and hit an apartment building. Nobody, he told the station, realized at first that a person had been hit.

A spokesman for the Atlanta Police Department said in a statement that investigators believe Thomas had suffered some kind of “medical episode.” CBS 46 later reported that Thomas was treated at the scene for a seizure before being taken to a hospital.

According to Fox, Thomas was charged with homicide by vehicle, as well as leaving the roadway. The police spokesman told 11Alive that Thomas, of Columbus, South Carolina, will be taken to Fulton County Jail once he’s released from the hospital.

The dog, a German shepherd, was uninjured and found its way back home.

Medical events and causes of crashes

Scholle Law wishes the Lowe’s family the very best as they respond to this terrible accident.

Pedestrian accidents are especially devastating because pedestrians are so vulnerable, with no seatbelts, airbags, helmets or other protective devices. We all rely on the people around us to drive safely—perhaps now more than ever, as the pandemic forces more people outside to exercise and socialize.

Based on the description of this accident in media reports, it’s extremely likely that no fault can be attributed to the victim, who was on the sidewalk. It will be more interesting to see whether the Atlanta Police Department ultimately attributes fault to Thomas (the driver).

The seizure reported in the news—if indeed that was the cause of the crash—could mean any number of things. Thomas may have been able to control, or at least be aware of, some of those possibilities

For example, if Thomas knew he had a medical condition that made seizures likely, that could suggest it was negligent of him to drive at all, or to drive without medication or other precautions. That, in turn, could help the victim’s family prove its case in an Atlanta pedestrian accident lawsuit.

When a crash changes everything

Suing someone who’s at fault for a terrible injury is about much more than closure. After many years of representing victims of serious accidents, we’ve learned that it’s often about making sure the family can make ends meet.

After someone dies, the family instantly loses any income that person was making, as well as their household contributions and care, companionship and guidance as a spouse and/or parent. You can claim compensation for those losses in a Georgia wrongful death lawsuit, along with compensation for accident-related medical costs, funeral costs and more.

If you’ve suffered a loss in the family or a serious injury because of someone else’s actions, you should call Scholle Law. For more than 2 decades, we have helped Georgians seek fair compensation from the people who harmed them. We offer free consultations, so there’s no risk and no further obligation from meeting with us to talk about your legal options.