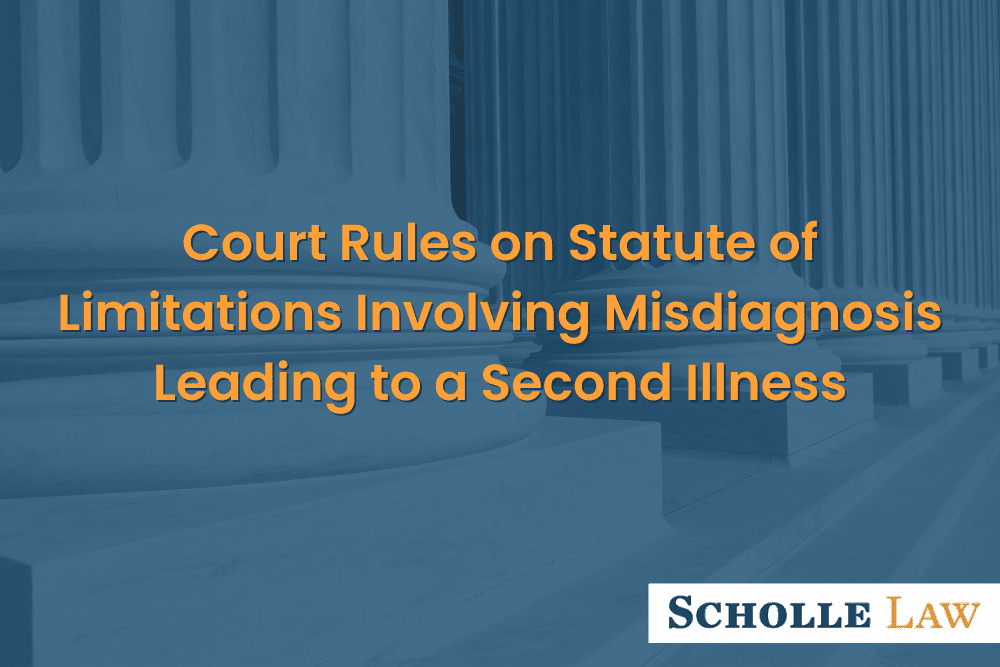 In a recent case, the Court of Appeals of Georgia held that where a misdiagnosis leads to a second more serious illness, the date of the injury is the date when symptoms of the second illness begin to appear, not the date of the misdiagnosis. If you were injured in Georgia due to a misdiagnosis, you should consult an experienced Georgia personal injury lawyer that specializes in malpractice to discuss your options for seeking damages from the responsible parties.

Reportedly, the Plaintiff’s deceased Wife sought treatment from Dr. V.S., a gynecologist, due to abnormal bleeding and a tumor in her uterus. Dr. V.S. referred Wife to Dr. J.H. who evaluated Wife and determined there was a very low chance the tumor was cancerous, which Dr. V.S. took to mean the manner in which the uterus was removed did not matter. In December 2013, Dr. V.S. removed Wife’s uterus via a robotic hysterectomy, which morcellated, or cut up, the uterus and tumor rather than removing them whole. Subsequently, an analysis of the tissue revealed that the tumor was cancerous, but CT scans at that time did not indicate any cancer. In October 2014, however, a scan revealed the presence of abdominal tumors, indicating that the cancer had returned. Allegedly, the morcellating caused cancer that was previously confined to the uterus, to spread throughout Wife’s abdominal cavity. Wife subsequently died of metastatic cancer on May 19, 2015.

Allegedly, Plaintiff was appointed the administrator of Wife’s estate and filed claims on behalf of the estate against Dr. V.S. and five “John Doe” defendants in December 2015. Dr. J.S. was not named as a defendant in the original lawsuit. Subsequently, on April 21, 2017, Plaintiff Amended the complaint to name Dr. J.H. as a defendant.

Dr. J.H. asserted that Plaintiff’s claims against the estate were barred by the two-year statute of limitations and filed a Motion to Dismiss. Plaintiff argued, in part, that Wife suffered a new injury in October 2014 when the cancer metastasized, and pursuant to Georgia law 9-3-32 the statute of limitations was tolled from the time of Wife’s death to when Plaintiff was appointed the administrator of her estate. Plaintiff also argued his claims against Dr. J.H. were timely because they related back to the original Complaint. Dr. J.H.’s Motion to Dismiss was converted to a Motion for Summary Judgment, which the court granted. Plaintiff subsequently appealed.

On appeal, Plaintiff argued that the court committed an error in ruling he could not show a new injury as a matter of law. Under Georgia law, the injury in cases alleging a misdiagnosis typically occurs at the time of misdiagnosis and not when the proper diagnosis is identified. An exception to the general rule applies, however, when a patient does not receive care for a treatable condition due to a misdiagnosis which then leads to a more serious condition. In those cases, the injury is the later development of the second condition. As such, the date of the injury is the date when the patient begins experiencing symptoms related to the second illness.

Dr. J.H. argued the second injury standard should not apply because Wife’s cancer prior to the surgery was not treatable or benign. The court disagreed, finding that the evidence of record showed Wife’s misdiagnosis led to improper treatment and her subsequent more debilitating condition, which ultimately led to her death. As such, the appellate court found that the trial court erred as a matter of law in ruling the new injury exception was not applicable. The court also found that the trial court erred in finding the statute was not tolled upon Wife’s death. As such, the court reversed the trial court ruling.

If you or someone you loved suffered a personal injury due to malpractice, you may be able to recover compensation for the harm you suffered. The experienced Georgia medical malpractice attorneys of Scholle Law will work diligently to assist you in your pursuit of damages. Contact us at 770-717-5100 to schedule a free and confidential consultation.