Georgia Court Clarifies When Plaintiff Has Duty to Preserve Evidence 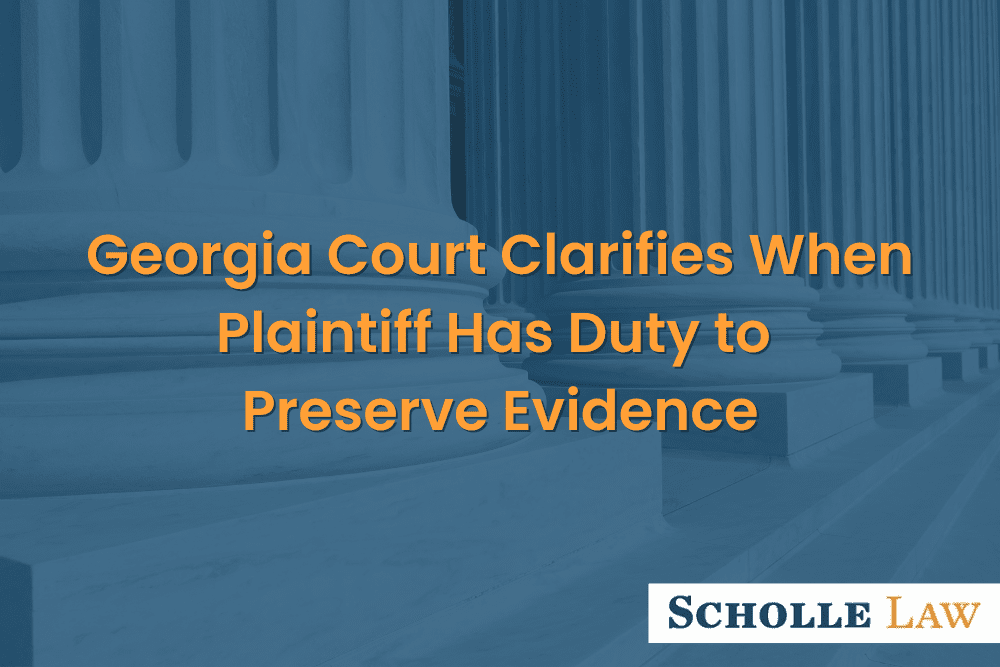 When a case goes to court, both sides are supposed to present evidence to support the arguments they are making. In fact, evidence is one of the most important (if not the most important) aspects of a case. If there is no evidence, then it is impossible for the plaintiff to prove their case. So clearly evidence is crucial. However, there are some kinds of evidence that one of the parties will be in a much easier place to hold on to. For example, a business will be in the best position to access important business records. At some point, there is a time when a party is required to hold on to certain evidence. If you have questions of this nature, be sure to reach out to a Georgia car accident attorney.

This case looks at when the duty to preserve evidence applies in Georgia. Here, the plaintiff’s husband was killed in a car accident. He was driving on Interstate 16 when a tread on his left rear tire detached. It allegedly caused him to lose control of the vehicle and his vehicle eventually flipped over. He was injured, and although he regained consciousness at the hospital he died before he was able to be discharged from the hospital. His wife filed this suit on his behalf.

While the victim was in the hospital, his wife said that he told her to save the tire (or tires; it’s unclear which). The wrecked car was towed to a storage yard. The victim’s wife was told that she had to pay a fee for each day the car was stored there, but if she transferred title to the storage yard’s owner, he would not charge her for the storage. She agreed but told him to save the left rear tire. After the victim died, an attorney hired by his daughter retrieved the tire from the storage yard.

The plaintiff then brought this suit against the tire company alleging negligent design and manufacture, strict liability, and failure to warn. They filed an answer that stated that the defendant reserved the right to plead spoliation of critical evidence. Spoliation is when one party intentionally hides, destroys, damages, etc. evidence so it cannot be used in a lawsuit. The tire company eventually asked for the case to be dismissed due to the spoliation of evidence. The trial court denied this motion.

On immediate review, the Georgia Court of Appeals affirmed the trial court’s order. They noted that the test for spoliation is whether the litigation was reasonably foreseeable to the plaintiff. The Georgia Supreme Court here also affirmed the judgment of the Court of Appeals. They noted that the defendant did not prove that the plaintiff had a duty to preserve the evidence beyond the tire they saved. The high court held that the issue of preserving evidence needed to be considered from the victim’s wife’s perspective. Since at the time that she okayed the other tires being destroyed she was not contemplating litigation. Thus, there was no spoliation.

It’s important to contact a knowledgeable Georgia car accident attorney as soon as possible after an accident so they can help you preserve relevant evidence. The experienced personal injury attorneys at Scholle Law represent accident victims in Georgia cities, including Duluth, Suwannee, Lawrenceville, and Snellville. They can help you or a loved one recover the damages that you deserve. Clients only pay us if they recover. Schedule your free consultation today by calling 866-972-5287 or using the contact form on our website.