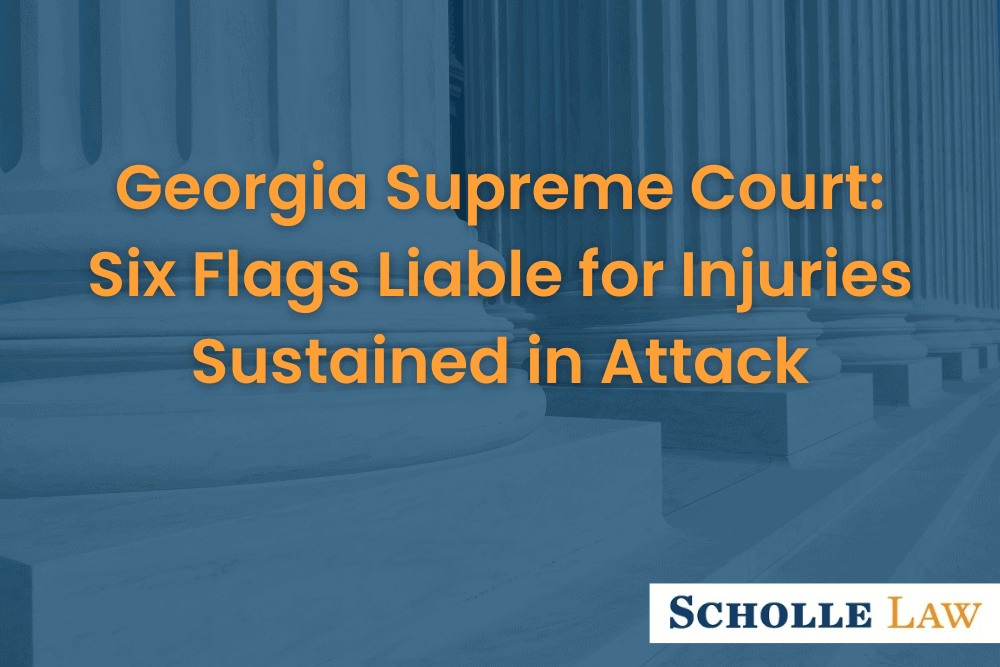 The Georgia Supreme Court recently issued an opinion that has clarified the liability of property owners for serious injuries sustained by invitees to their property. About ten years ago, a man was departing Cobb County Six Flags Over Georgia when he was severely beaten. His injuries resulted in permanent brain damage. A jury awarded the victim $35 million in damages, but the Georgia Court of Appeals ruled that the damage award was not apportioned properly between the defendants and sent it back to the trial court for a new trial. This ruling was appealed and the case went to the Georgia Supreme Court. The high court’s decision held that Six Flags could be held liable for the injuries and that the apportionment of damages various defendants will pay did not require a full retrial of the case.

The case clarifies certain aspects of Georgia law with regard to property owner liability. The victim in this case was an invitee under Georgia law. Official Code of Georgia section 53-3-1 states that when an owner or occupier of land, effectively invites others on the premises for a lawful purpose, the property owner is liable for damages to those harmed by the owner’s “failure to exercise ordinary care in keeping the premises and approaches safe.” In this case, the plaintiff was brutally beaten by some seasonal employees and others who planned an attack on him as he left the park and waited for a bus.

The court emphasized in its opinion that a property owner cannot avoid responsibility for the injuries sustained by someone on its property in the circumstances presented in this case. Because the attack effectively began on Six Flags property, the fact that it ended beyond its property at the bus stop and city streets, did not alter Six Flags’ liability to maintain safe premises. The court noted that, depending on the circumstances,  a property owner has a duty to keep visitors safe and secure while on their property. The court specifically held that the injured victim was owed that duty by Six Flags and that a property owner can be held liable when that duty is breached and when that breach “causes injuries even if the resulting injury ultimately is completed” outside its property.

The Georgia Supreme Court further explained that a landowner must “exercise ordinary care to protect the invitee from unreasonable risks of which he or she has superior knowledge.” A landowner must protect against what it can foresee as potential criminal acts. The evidence in this case involved Six Flags’ prior knowledge of potentially criminal elements within its employee ranks and the conception of the attack with in the park premises by the attackers. Although the Georgia Supreme Court held that a bus stop outside its premises was not within the park’s control, the mere fact that the victim left the premises and stepped out to a bus stop, was not sufficient for the park to avoid liability for its share of the responsibility for his massive injuries. The high court’s decision will result in a determination of the share each defendant will be responsible for from the the $35 million dollar award to the plaintiff.

Scholle Law represents those who have been injured due to the negligence or failure of a property owner to keep their premises safe. Georgia premises liability laws hold property owners and others responsible for dangerous conditions that cause harm or injury. Accidents like a slip and fall at a store, or restaurant are examples of this. Other examples are assaults on innocent victims who are in an apartment complex or its parking facility that has poor lighting or is otherwise unsafe.