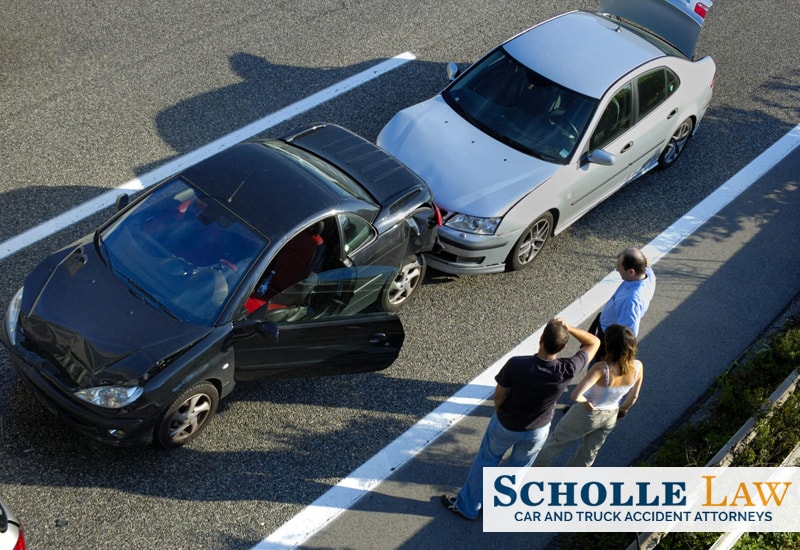 Why are there so many rear-end car collisions in Atlanta?

The Metro Atlanta area has a flourishing economy that has been attracting newcomers for decades.  However, as the area continues to grow, so does the number of vehicles on the road.

Rear-end car accidents are one of the most common types of motor vehicle crashes in the state of Georgia, and the leading type of personal injury accident. And while any accident can have a devastating effect on your life depending on the damage to your property and the injuries you sustain, a rear-end collision can come with no warning at all, altering your life in a matter of seconds.

But why are rear-end car collisions so prevalent in Atlanta these days?

To answer that question, we must take a closer look at the history of our city and the impact that technology has had on drivers.

It’s common knowledge that Atlanta has some of the worst traffic in the country. According to a report by the Atlanta Journal-Constitution, Atlanta actually ranks as one of the most congested cities in the world. The average commuter spends approximately 70.8 hours in traffic each year.

There are a number of contributing factors that add to Atlanta’s world-class traffic problem.

City planning and the grid

Firstly, Atlanta’s traffic is rooted in the history of the city. In the beginning of the 19th century, the city was built on a grid that ran parallel and perpendicular with the nearby railroad lines. However, as the city expanded beyond the railways, it began to adapt to a standard north and south grid. The problem was that people were now stuck with confusing roads where half were at diagonals running parallel to the railroads and half were running at a north-south grid. Those roads are some of the same ones we still have and use in Atlanta today.

In addition to the city’s unusual traffic grid, another major contributor to Atlanta’s traffic problem is the 4 major interstates that crisscross the city: Interstate 85, Interstate 75, Interstate 20, and Interstate 285.  Over the years, Atlanta has become a transportation hub, leading the way for important interstate highways to pass through the city.

Atlanta also has multiple major highways, and each one seems to be more crammed full of high-speed traffic than the next. The multitude of major roadways and the heavy reliance of interstate commuting has helped Atlanta to grow outward, allowing more Atlanta residents to live outside of the Metro Atlanta bubble, but that just equates to longer commute times.

As Atlanta and its suburbs have spread out, more and more people are relying on their own cars and the interstate systems, which jam easily from all the traffic.

City officials have tried to help cut down on the number of vehicles on the road by encouraging carpooling with the establishment of High Occupancy Vehicle (HOV) lanes and public transportation, such as bus and rail services through the Metropolitan Atlanta Rapid Transit Authority (commonly referred to as MARTA). But as people have begun to settle outside of the Metro Atlanta area to raise their families in more suburban areas, it has become harder for commuters to utilize many of the public transportation options.

The further people have to drive to and from their places of employment and their places of residence, the less chance they have of taking public transit, which means that more vehicles are on the road for longer periods of time.

Another reason why so many commuters spend their mornings and evenings in bumper-to-bumper traffic is due to the unrelenting pace that the city has continued to grow. With a population of over 6 million as of July 2019, Metro Atlanta is one of the nation’s fastest growing metropolitan areas. In fact, the Atlanta job market is one of the highest in the nation, falling close behind other up-and-coming cities like Dallas and Miami.

There are now multiple Fortune 500 companies headquartered in Atlanta, including Delta Airlines, United Parcel Service (UPS), Home Depot, and of course, the Coca-Cola Company, which originated in Georgia in 1886.

The city is also considered a relatively affordable place to live compared to other big cities. The housing costs in the Metro Atlanta area are considerably lower than in the North and West regions of the country.  In addition, the climate in Georgia is enjoyable year-round.

Atlanta also has an easily accessible airport which is the busiest passenger airport in the world, handling more than 107 million passengers in 2018. To top it off, Atlanta has so much to offer.  Between the city’s rich history, world-class restaurants, lively music venues and year-round sporting events, it’s no wonder why Atlanta has become such an appealing place to live, work and visit.

Unfortunately for residents, the appeal to migrate to Atlanta just means that as the population grows, so does the number of cars on the roads. This rapid growth quickly outpaces existing infrastructure, resulting in the city’s traffic woes.

In addition to the many contributing systemic and historical factors that make driving in Metro Atlanta uniquely challenging, stressful and frustrating, there’s a human factor that has resulted in a spike of rear-end collisions nationwide—that is, distracted driving.

By far the most common cause of rear-end accidents in Atlanta is distracted driving.

“A driver shall exercise due care in operating a motor vehicle on the highways of this state and shall not engage in any actions which shall distract such driver from the safe operation of such vehicle.”

What is distracted driving?

Distracted driving is essentially any activity that takes the driver’s eyes or attention away from the road, or their hands off the steering wheel. This can include a multitude of different types of distractions.

A third type of distraction is a manual distraction, which is when you manipulate something other than the steering wheel, such as eating or drinking while driving or reaching to grab something.

If you were involved in a rear-end collision in Atlanta, the odds are good that it was because the other driver wasn’t paying attention to the road when the accident happened.

Distractions can have serious consequences, and not just for drivers—but also for passengers and anyone else who shares the road with them. In an attempt to cut down on distracted driving accidents, lawmakers in Georgia have passed laws making it illegal to drive and use a hand-held cell phone.

In 2018, Georgia Governor Nathan Deal signed the Hands-Free Georgia Act. Commonly known as the Distracted Driving Law or the Hands-Free Law, House Bill 673 requires all drivers to use hands-free technology when they are behind the wheel. In fact, O.C.G.A. § 40-6-241(c)(2) makes it illegal to read a text, instant message, email, look at a website, watch, record or broadcast a video or movie, or use any other internet data while operating a vehicle. This includes being a driver who is stopped at a red light.

O.C.G.A. § 40-6-241 goes on to define holding a phone as physically holding or supporting with any part of your body:

“While driving a motor vehicle in Georgia, do not hold your smartphone or cell phone, and do not support such a device with other parts of your body, such as resting it on your leg or in your lap.”

This means that if you are caught with your smartphone or cell phone resting in your lap or propped up on your leg, then you can be cited for distracted driving.

According to O.C.G.A. §40-6-241 (a)(3), “wireless telecommunications device” means any type of cellular or portable telephone or text-messaging device, a personal digital assistant, a stand-alone computer, a global positioning system receiver, or substantially similar portable wireless device that is used to initiate or receive communication, information, or data. Since many people use iPads, laptops, computers and other devices while driving, it is important to note that the law includes these items as well.

These laws are only effective if they are obeyed. Drivers who continue to use their cell phones while behind the wheel can and do cause preventable car accidents. According to a 2019 Centers for Disease Control and Prevention (CDC) report, approximately 9 people are killed each day in the United States in motor vehicle accidents that involve a distracted driver, and thousands more are injured.

Rear-end accidents, in particular, can have serious consequences. Due to the violent nature of whiplash caused when the driver and passengers are thrown forward upon impact, even a low speed rear-end collision could result in severe injuries.

If you or a loved one were involved in a rear-end collision due to no fault of your own, you should not be held liable for any damages or injuries. Make sure that speak with an experienced Atlanta car accident attorney at Scholle Law as soon as possible if you or someone you know were hurt in a rear-end motor vehicle accident.