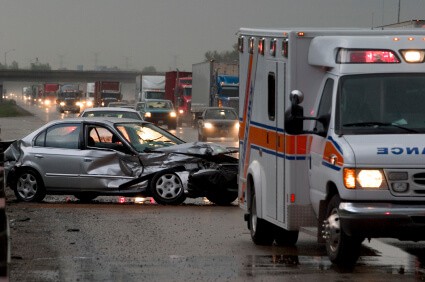 This past week a major crash occurred in DeKalb County, pointing again to the dangers on Atlanta area roads. The tragic accident which occurred on I-285 involved a hit and run tractor-trailer. As an Atlanta area truck injury lawyer, I believe that hit and run accidents are unfortunately becoming more and more common.

The facts of the crash are still being reviewed by authorities, but one thing is tragically known. Two men were killed in the wreck, one a resident of Stone Mountain and the other of Covington.

We have often heard of chain-reaction truck and auto crashes, but usually the vehicles are disabled to the point where most of them remain in the vicinity. But the crash this past week was different. Apparently, the crash occurred in the early morning hours last Tuesday and shut down traffic during the commute.

It is believed that the chain-reaction was likely started by a tractor-trailer that first hit a car which then collided with another car. The truck kept driving and the driver has not been located, but will likely be charged once he is located. Minimally, the charges would include hit and run, a violation of Georgia law.

The driver of the last vehicle was taken to the hospital for treatment and will not be charged with any crime. But that is not the case with the tractor-trailer driver who drove away after hitting the first car.

The applicable Georgia law O.C.G.A. § 40-6-270 (a) provides that the driver of any vehicle that is involved in an accident resulting in injury to or the death of any person or in damage to a vehicle which is driven or attended by any person shall immediately stop such vehicle at the scene of the accident or shall stop as close thereto as possible and forthwith return to the scene of the accident…”

In addition, subsection (b) provides that: “If such accident is the proximate cause of death or a serious injury, any person knowingly failing to stop and comply with the requirements of subsection (a) of this Code section shall be guilty of a felony and, upon conviction thereof, shall be punished by imprisonment for not less than one nor more than five years.”

What this means is, the driver of the truck that began the chain reaction would be the “proximate cause” of the death of the two men and the driver could be charged with a felony for his or her failure to remain on the scene of the accident.

My law practice specializes in cases involving serious injury and accidents. Truck accidents can be particularly devastating and requires expertise and experience in building a legal case. Please contact my Gwinnett County and Atlanta area law offices if you have been injured in a truck accident in the Atlanta, Georgia area. I provide consultations at no charge for those who would like to know their legal rights in commercial vehicle accidents and injury matters.