What if I’m Partly to Blame For My Truck Accident? 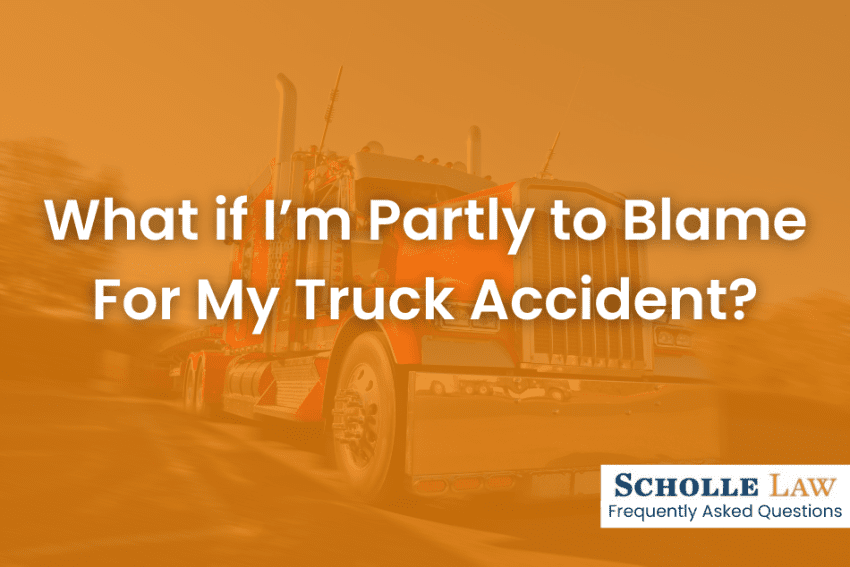 As essential as trucking is, truck accidents are also a motorist’s nightmare. Big-rig trucks can weigh around 80,000 pounds. Accelerate forty tons to high speeds along the highways and you understand the horrific damage that can come from a truck accident.

The Peril of Truck Crashes: A Motorist’s Nightmare

That’s why large trucks are involved in an inordinately high number of fatal crashes-over 4,000 deaths in the most recent year for statistics. The number of fatal large-truck crashes has also increased by half over the past ten years. And it’s not usually the trucker who dies in the crash. Passenger-vehicle occupants represent two-thirds of large-truck-accident deaths and pedestrians another fifteen percent.

Anyone who ventures out on the highways knows that trucks are America’s commercial lifeline. The latest statistics show that the U.S. employs 3.5 million truckers, while the industry projects the coming need for a million more. Truckers are in demand, so much so that the industry has an aging workforce and faces a labor shortage.

The average trucker is fifty-five years old, ten years older than the average age across similar trades and professions.

Truck accidents are usually the result of a combination of factors, often including some degree of both trucker error and other-driver error. A Federal Motor Carrier Safety Administration (FMCSA) study found that driver error causes by far the greatest number of truck accidents, about 87% of them. The most common errors in descending order are failure to brake timely, failure to account for traffic stops and congestion, prescription drug use, driving too fast, and navigation errors with unfamiliar roadways.

By contrast, only about 10% of truck accidents involve vehicle problems. The same FMCSA study found four main categories of driver error, including:

Disputed Accident Causes: Whose Fault Is It?

Truck accidents are not always one driver’s fault. The trucker may be driving too fast for highway conditions, yet an accident might not happen until the passenger vehicle driver fails to observe traffic signs and carelessly pulls out in front of the speeding trucker.

Or, the passenger vehicle driver may be weaving recklessly in and out of traffic lanes, but no accident happens until a fatigued truck driver fails to brake for the reckless driver.

A large percentage of motor vehicle accident liability claims involve disputes over who is at fault for causing the accident.

A big rig’s massive size presents the truck driver with steering and vision problems. A trucker must make a wider turn at sharp corners to avoid running the trailer over the curb and into signs and poles. And the trucker may not be able to see a small car close beside or behind the truck.

A big rig’s massive weight presents the truck driver with braking and control problems. Big rigs can take far longer to stop. A passenger-vehicle driver may turn or merge in front of another car, reasonably expecting the car to slow. A trucker is simply not able to slow a big rig within the same distance.

You’d have to drive a big truck to fully appreciate the difference. Highways would be safest if all vehicles had the same properties. They don’t. Watch out for large trucks.

America’s old common law, borrowed from England, was different: if the injured party was partially at fault for the accident, then the injured party had no claim. Only four states, Alabama, Maryland, North Carolina, and Virginia, plus the District of Columbia, retain that old doctrine known as contributory negligence.

Georgia Code §51-12-33(a) codifies this comparative-negligence doctrine as follows:

Evaluating Your Claim: Who Decides?

While Georgia Code §51-12-33(a) states that “the trier of fact” determines who is at fault and in what percentages, the vast majority of cases settle well before going to a judge or jury. So, who or what is deciding these cases?

Whether their statements are trustworthy or not, drivers making admissions or accusations at the scene play a role in determining fault. Drivers are often the key eyewitnesses in an accident. Their statements may go a long way in assigning percentages of fault.

If you suffer injury in an accident in which you were a driver, be accurate and careful about what you say, and listen carefully to what the other driver says.

Police also investigate accidents, interviewing witnesses and examining vehicle locations and damage. Police then write official accident reports. Their duties do not generally require them to assign percentages of fault. They instead may issue traffic citations. But police investigations, opinions, and determinations can also go a long way toward determining relative fault, whether 50/50, 60/40, 80/20, or some other allocation.

Ultimately, truck accident cases that settle do so because the injured claimant and the liability insurer have agreed on a compromise figure, somewhere in the broad middle between what the injured party wants and the insurer wants to pay.

That’s where you need the representation of premier Georgia truck accident attorney Charles Scholle at Scholle Law. You need an advocate to put the full picture together for the liability insurer, convincing the insurer that your expert attorney is ready to prove the maximum value of your claim at trial. Charles Scholle and the expert truck-accident team at Scholle Law know how to advocate comparative negligence percentages.

Georgia law modifies the comparative negligence doctrine in a way that creates a fault trap for many injured parties. Georgia Code §51-12-33(g) provides that “the plaintiff shall not be entitled to receive any damages if the plaintiff is 50 percent or more responsible for the injury or damages claimed.” Georgia thus adopts a modified form of comparative negligence that bars the injured party’s recovery unless the defendant is more at fault than the injured party.

Avoid the claimant-fault trap. Don’t let a liability insurer convince you that you were more at fault than the evidence reflects.

Charles Scholle and the expert truck accident team at Scholle Law know how to investigate and prepare a case to appropriately minimize the injured party’s fault and maximize the other driver’s fault.

Charles Scholle also has the premier reputation, substantial resources, and impressive record of truck accident trial and claim results to convince insurers to pay fair value. And if the insurer doesn’t make a fair offer that you are willing to accept, then you have the expert team at Scholle Law to convince a jury to do its proper justice. Get the best on your side. Retain Charles Scholle at Scholle Law now by calling (866) 592-1296 or contacting us online.