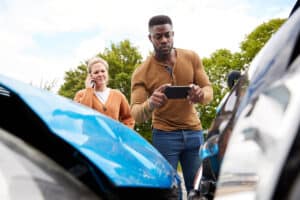 Police are called to the scene of most car accidents. When this happens, at least one person typically receives a ticket for violating a traffic law. Sometimes the officer issues no ticket. Sometimes, a police officer doesn’t even arrive on the scene if the accident occurred on private property.

Traffic tickets are important evidence in car accident cases. When you don’t have one to cite, you can still pursue compensation. A lawyer can argue your claim or lawsuit without a ticket as evidence. If you have legal questions, make sure you speak to a Duluth car accident attorney as soon as possible.

There are many reasons why a police officer may not issue a ticket following a car accident. In most cases, the officer did not personally see the accident happen. After most accidents, there are no witnesses who will stop and provide details to the police.  Therefore, the officer may have to rely on differing versions of the wreck given by the parties involved.  This may prevent them from issuing a ticket.

Other signs of fault may allow the officer to assign blame. These signs include:

Some accident types indicate fault. A rear-end collision is generally the fault of the rear driver, for example.

If an officer does not see obvious signs of who is at fault in an accident, then law enforcement will probably not issue a traffic ticket. This will result in a car accident where no one gets ticketed.

If an officer does issue a traffic ticket, then that ticket can help your lawyer determine who was at fault in a car accident. The responding officer will also likely write a police report. This report details all relevant information they received at the scene of the accident.

How important is a ticket in determining fault?

A ticket can be important when determining fault. However, the ticket reflects an officer’s opinion. It is not a final verdict.

Police will often make their own judgment of fault. Insurance companies and car accident attorneys will conduct independent investigations. All three parties could reach different conclusions about fault.

A traffic ticket is one piece of evidence, albeit a potentially impactful one. When no officer issues a ticket, attorneys argue their case based on other types of evidence.

In some states, fault is not relevant to insurance claim payment. These states are known as “no-fault” states. Georgia is a fault state, which is the opposite of a no-fault state. The state of Georgia follows a legal principle known as “comparative fault.”

In comparative fault states like Georgia, an at-fault party pays according to their specific share of fault. Let’s say you suffered $100,000 in damages. You were then determined to be 20% at fault for the accident. The maximum amount of compensation you will be allowed to recover is $80,000, which is 80% of $100,000. The 20% share of fault (which is yours) is deducted from your potential compensation.

You cannot receive compensation if you are at fault for more than 50% of your accident. Because of these rules, fault is very important in Georgia car accident cases.

How to Demonstrate Fault

Evidence is important when proving fault. The more evidence that you have to prove the other driver’s negligence, the better. In a car accident where no one gets ticketed, your lawyer is already down one piece of evidence.

Other types of evidence your lawyer may use to prove fault are:

Your lawyer may obtain other types of evidence for your case. Each piece of allowable evidence can be used to prove fault and support your losses.

The Difference Between Circumstantial and Direct Evidence

There are two general types of evidence in car accident cases:

Circumstantial evidence may be less concrete. You have to make logical inferences from such evidence. For example:

If someone walks inside wearing a wet raincoat, then that is circumstantial evidence that it is raining outside. You don’t see the rain, but you can infer that the moisture on their raincoat is rain.

You won’t know for certain if it’s raining without some further investigation, which may produce direct evidence of rain. However, a wet raincoat is a significant piece of evidence.

Car accident claims often include both direct and circumstantial evidence. Your lawyer will know how to obtain and utilize both types of evidence.

You don’t need a traffic ticket in hand to file an action against an at-fault party. You should still put ample thought into your case. Your lawyer must show why the other driver was at fault for your accident. This will be necessary to win your case.

Georgia Driving Laws That Can Influence Your Car Accident Claim

All drivers must follow the law. A driver is liable if they disobey the rules of the road and cause an accident. Their conduct can be used against them during your claim or lawsuit. Some of the most common traffic violations are:

Your lawyer will cite any traffic violations by the driver who caused your accident.

There are three main types of compensation that available to car accident victims:

Non-economic damages are less obvious. They include physical pain and psychological trauma.

How an Experienced Attorney Can Help You Win

Some people think that you can simply file a claim and count your awards. This isn’t how such things work. Insurance companies don’t stay in business by simply accepting all claims. They will do everything possible to minimize payouts.

You only get one chance to prove your case. Let a lawyer do it right.

Seeking awards after a car accident where no one gets ticketed is tricky. These cases require unique considerations. A lawyer can navigate the complexities of your case.

It’s important to speak to an experienced attorney right away. The Duluth car accident attorneys at Scholle Law have helped accident victims for more than two decades.

We offer free consultations to all prospective clients. To schedule your appointment, call us at (866) 797-0140 or contact us online. We have four convenient locations around the greater Atlanta area.