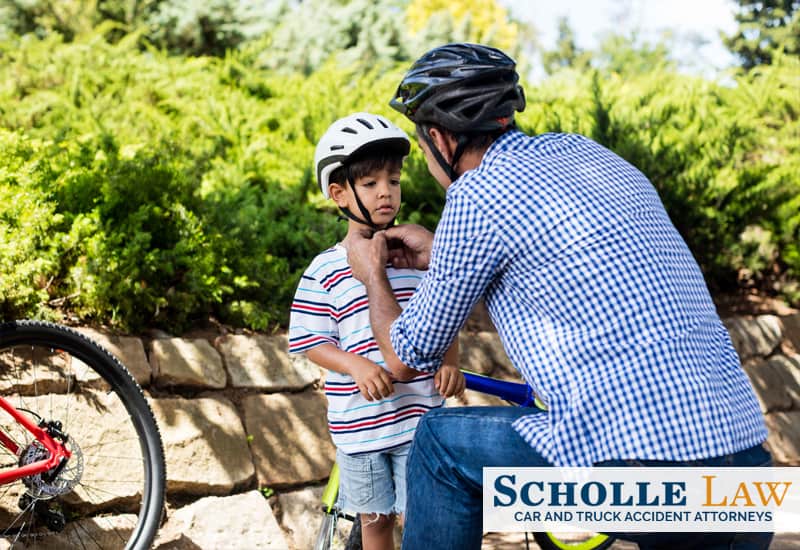 When riding a bicycle, a helmet is one of the easiest forms of insurance you can buy — cheap protection against a traumatic injury. Though a bike helmet doesn’t guarantee that you won’t get injured while cycling, especially if you get hit hard by a car or truck, it does provide vital protection to your head and brain in the event of a fall or collision. While no state has a universal bicycle helmet law, a handful of states (including Georgia) have enacted laws that govern in which circumstances helmets and other safety equipment must be worn, and what the penalties are for failing to follow the law.

Essentially, Georgia’s bicycle helmet law requires every biker under the age of 16 to wear an ANSI compliant helmet. If you are over 16, then you aren’t required by law to wear a helmet in Georgia. Moreover, there are no criminal penalties for failing to wear a helmet. However, as a personal injury law firm that has represented hundreds of accident victims across the state of Georgia, we can’t stress enough the importance of wearing a helmet at all times while riding your bicycle — even if state law doesn’t require it. If you’re hit by a car while biking without a helmet, your risk of suffering a catastrophic injury such as traumatic brain injury (TBI) is significantly higher.

Lights and Other Equipment on Bicycles (Section 40-6-296)

Georgia’s precise requirements regarding bicycle helmet use are set forth in subsections 1-6 of Section 40-6-296. Subsections (a)(b) and (c) layout Georgia’s law with respect to the necessity of required bike lights for nighttime bicycle operation, a proper brake and the prohibition of “Ape” or “Ape Hanger” high bicycle handlebars. Here’s the full text of the law:

(a) Every bicycle when in use at nighttime shall be equipped with a light on the front which shall emit a white light visible from a distance of 300 feet to the front and with a light on the back which shall emit a red light visible from a distance of 300 feet to the rear. Any bicycle equipped with a red reflector on the rear that is approved by the Department of Public Safety shall not be required to have a light on the rear of the bicycle. (b) Every bicycle sold or operated shall be equipped with a brake which will enable the operator to make the braked wheels skid on dry, level pavement. (c) No bicycle shall be equipped or operated while equipped with a set of handlebars so raised that the operator must elevate his or her hands above the operator’s shoulders in order to grasp the normal steering grip area. (d)
(1) No person under the age of 16 years shall operate or be a passenger on a bicycle on a highway, bicycle path, bicycle lane, or sidewalk under the jurisdiction or control of this state or any local political subdivision thereof without wearing a bicycle helmet. (2) For the purposes of this subsection, the term “bicycle helmet” means a piece of protective headgear which meets or exceeds the impact standards for bicycle helmets set by the American National Standards Institute (ANSI) or the Snell Memorial Foundation. (3) For the purposes of this subsection, a person shall be deemed to wear a bicycle helmet only if a bicycle helmet of good fit is fastened securely upon such person’s head with the straps of such bicycle helmet. (4) No bicycle without an accompanying protective bicycle helmet shall be rented or leased to or for the use of any person under the age of 16 years unless that person is in possession of a bicycle helmet at the time of the rental or lease. (5) Violation of any provision of this subsection shall not constitute negligence per se nor contributory negligence per se or be considered evidence of negligence or liability. (6) No person under the age of 16 failing to comply with any provision of this subsection shall be fined or imprisoned.

Clinging to vehicles (Section 40-6-293) No person riding upon any bicycle, coaster, roller skates, sled, or toy vehicle shall attach the same or himself to any vehicle upon a roadway. Riding on roadways and bicycle paths (Section 40-6-294)

(a) As used in this Code section, the term “hazards to safe cycling” includes, but shall not be limited to, surface debris, rough pavement, drain grates which are parallel to the side of the roadway, parked or stopped vehicles, potentially opening car doors, or any other objects which threaten the safety of a person operating a bicycle. (b) Every person operating a bicycle upon a roadway shall ride as near to the right side of the roadway as practicable, except when:
(1) Turning left; (2) Avoiding hazards to safe cycling; (3) The lane is too narrow to share safely with a motor vehicle; (4) Traveling at the same speed as traffic; (5) Exercising due care when passing a standing vehicle or one proceeding in the same direction; or (6) There is a right turn only lane and the person operating the bicycle is not turning right; provided, however, that every person operating a bicycle away from the right side of the roadway shall exercise reasonable care and shall give due consideration to the other applicable rules of the road.
(c) Persons riding bicycles upon a roadway shall not ride more than two abreast except on bicycle paths, bicycle lanes, parts of roadways set aside for the exclusive use of bicycles, or when a special event permit issued by a local governing authority permits riding more than two abreast. (d) Whenever a usable bicycle path has been provided adjacent to a roadway and designated for the exclusive use of bicycle riders, then the appropriate governing authority may require that bicycle riders use such bicycle path and not use those sections of the roadway so specified by such local governing authority. The governing authority may be petitioned to remove restrictions upon demonstration that the bicycle path has become inadequate due to capacity, maintenance, or other causes. (e) Bicycle paths subject to the provisions of subsection (d) of this Code section shall at a minimum be required to meet accepted guidelines, recommendations, and criteria with respect to planning, design, operation, and maintenance as set forth by the American Association of State Highway and Transportation Officials, and such bicycle paths shall provide accessibility to destinations equivalent to the use of the roadway. (f) Any person operating a bicycle in a bicycle lane shall ride in the same direction as traffic on the roadway. (g) Electric assisted bicycles may be operated on bicycle paths.

Carrying articles (Section 40-6-295) No person operating a bicycle shall carry any package, bundle, or other article which prevents him from keeping at least one hand upon the handlebars. Violation of part a misdemeanor; duty of parents and guardians (Section 40-6-297)

(a) It is a misdemeanor for any person to do any act forbidden or fail to perform any act required in this part. (b) The parent of any child and the guardian of any ward shall not authorize or knowingly permit such child or ward to violate any of the provisions of this part.

Tips and tools for cyclists in Georgia

Are you at least 16 years old? If so, then no — you aren’t required by law to wear a helmet while cycling (but it’s smart to wear one anyway!). If you are under the age of 16, then yes — you ARE required to wear a helmet. You might not get into trouble personally for not wearing a helmet since Georgia doesn’t penalize children and teens for riding without one; however, your parents could be charged with a misdemeanor for not enforcing the bike helmet law.

Most cyclists obey traffic laws while riding, but some of the biggest offenses include riding against traffic on a roadway, failing to yield at a stop sign, and biking at night without bike lights. Another interesting legal tidbit in Georgia is that it is illegal to carry passengers on a bike – only 1 person is allowed on a bike at a time. It’s important that drivers remember not to leave the scene of a bike accident as doing so can lead to misdemeanor hit-and-run charges. Some cyclists carry their ID and emergency contacts under their helmet, or under their seat in a special kit or case often located on the bike frame itself. In case of a crash, some cyclists also carry a mobile phone with emergency contacts listed out, or under ICE (In Case of Emergency) in the phone address book.

Bicycle-related injuries are responsible for more than 1.2 million doctor visits per year in the U.S., costing Americans and insurance companies more than $8 billion each year. Common injuries cyclists suffer — often when they’re not wearing a helmet — include:

Following an accident, cyclists who feel pain but see no bruising or other symptoms are urged to see a doctor immediately to be checked for any trauma that could lead to a hematoma (internal bleeding).

Here at Scholle Law, your well-being and recovery matter to us and it shows. Check out what our clients have to say about our representation in our Client Testimonials page. If you or a loved one was involved in a serious accident while you riding a bicycle, talk with a knowledgeable attorney today about your situation. Your first consultation at Scholle Law is free. Our team of attorneys and staff can help you learn more about any potential case and legal road path moving forward.