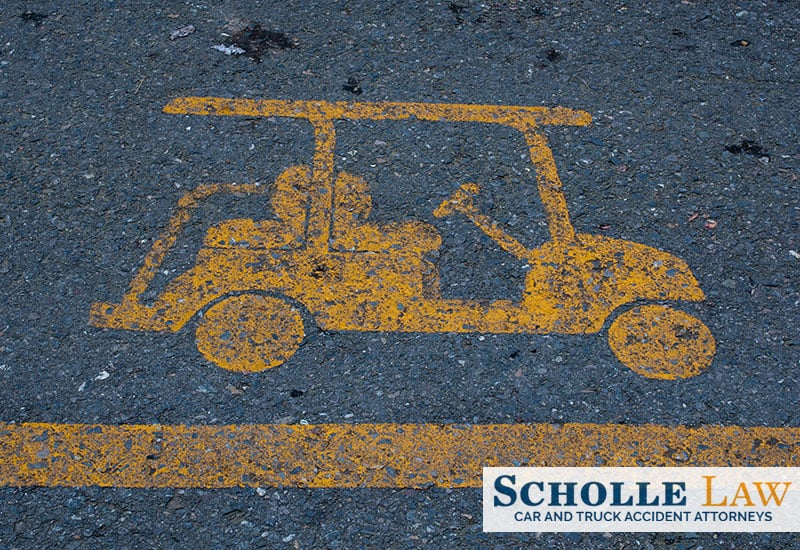 Common questions about driving a golf cart, and what Georgia law says about motorized carts

As a hobby, golf is not only popular here in Georgia but nationwide. The National Golf Foundation estimated that 34.2 million Americans above the age of 6 played golf in 2019—both on and off-course. A majority of golfers (24.3 million) played on a golf course, while the rest engaged in off-course activities such as driving ranges and popular golf entertainment venues like Topgolf or Drive Shack.

With so many people frequenting the golf course and driving around on golf carts, it’s inevitable that accidents and injuries will occur. In fact, Georgia has enacted laws in an attempt to prevent such accidents.

Georgia’s Motorized Cart Law (O.C.G.A. § 40-6-331) provides the legal standards for driving motorized carts and low speed vehicles (LSVs), possibly including golf carts, on streets. It does not appear that it is legal to simply drive a motorized cart on a public road in Georgia.

However, the statute does allow the “local governing authorities,” which would ostensibly include cities or counties, to promote ordinances authorizing golf carts and other motorized carts to be driven on public streets and roads.

What is a “motorized car”?

According to Georgia law, a motorized car is defined as “every motor vehicle having no less than three wheels and an unladen weight of 1,300 pounds or less and which cannot operate at more than 20 miles per hour.”

…any motorized vehicle designed for the purpose and exclusive use of conveying one or more persons and equipment to play the game of golf in an area designated as a golf course. For such a vehicle to be considered a golf car or golf cart, its average speed shall be less than 15 miles per hour (24 kilometers per hour) on a level road surface with a 0.5% grade (0.3 degrees) comprising a straight course composed of a concrete or asphalt surface that is dry and free from loose material or surface contamination with a minimum coefficient of friction of 0.8 between tire and surface.

The full text of Georgia’s statute on motorized carts is as follows:

Section 40-6-331 Local Control of Use of Motorized Carts; Rules not Applicable to Carts Used Only on Golf Course; Crossing Roads and Highways

(b) Such ordinances may establish operating standards but shall not require motorized carts to meet any requirements of general law as to registration, inspection, or licensing; provided, however, that a local governing authority may, by ordinance, require the local registration and licensing of such carts operated within its boundaries for a fee not to exceed $15.00, the license to remain permanently with such cart unless such cart is sold or the license is destroyed. The provisions of this subsection and the authority granted by this subsection shall not apply to motorized carts owned by golf courses, country clubs, or other such organized entities which own such carts and make them available to members or the public on a rental basis, provided that such motorized carts are used only on the premises of such golf courses, country clubs, or other such organized entities.

(c) Ordinances establishing operating standards shall not be effective unless appropriate signs giving notice are posted along the public streets affected.

(d)(1) Motorized carts may cross streets and highways that are part of the state highway system only at crossings or intersections designated for that purpose by the Department of Transportation.

(2) Motorized carts may cross streets and highways that are part of a municipal street system or county road system and used by other types of motor vehicles only at crossings or intersections designated for that purpose by the local governing authority having jurisdiction over such system.

Motorized carts, including golf carts, in Georgia may be driven on Georgia streets.

At the very least, individuals should operate such carts at night only with sufficient lighting.

What makes a golf cart street legal in Georgia?

While individual counties and municipalities have the choice to pass local ordinances about whether or not to allow golf carts to ride on the roads, all golf carts must include the following working components in order to be considered “street legal” in Georgia:

In Georgia, go-karts typically fall into the categories of either low-speed vehicles (LSVs) or personal transportation vehicles (PTVs), depending on your go-kart’s maximum speed, capacity, weight and number of wheels. If your go-kart has at least 4 wheels, a maximum speed of under 20 mph, a capacity of less than 8 and an empty weight of 1,375 pounds, then it’s considered a PTV. Otherwise, it falls under the LSV category.

Both LSVs and PTVs can be street legal if certain requirements are met:

Some off-road go-karts are classified as all-terrain vehicles (ATVs) in Georgia, in which case they are not legal on public roads and highways. However, you are allowed to operate ATVs at designated trails and on private property.

What is the legal age to drive a golf cart?

In Georgia, you must have a valid driver’s license or permit in order to drive a golf cart alone. Anyone who is above the age of 12 can operate a golf cart as long as they are accompanied by a licensed driver who is an adult (18 years or older).

Can I drive an ATV or UTV on Georgia roads?

Most all-terrain vehicles (ATVs) and utility-terrain vehicles (UTVs) are not legal on public roads and highways in Georgia. However, you are allowed to operate ATVs and UTVs at designated trails and on private property.

Can I get a DUI while driving a golf cart?

Simply put, yes. Georgia’s DUI law applies to all motor vehicles, including golf carts, go-karts, ATVs and other motorized carts. In addition, the state DUI law applies to both public and private roads, so you can get a DUI for driving while intoxicated on private property.

As a Georgia auto accident lawyer, Charles Scholle and his team have handled many cases involving golf course injuries throughout Georgia. As a result, we believe that it is best to only operate golf carts or motorized carts on golf courses or other designated communities. It is legal, however, to cross a public way. For instance, many popular golf courses in Georgia cross public roads. These crossings should be government-approved with appropriate signage.

Golf carts and motorized carts are unprotected, and a serious accident in a golf cart can lead to catastrophic injury or wrongful death. Make sure you know the law and exercise care.

At Scholle Law, we offer free confidential consultations to riders of electric or motorized carts (including golf carts) who have been injured in an accident. To set up your free consultation, send our firm a message online or call us toll-free at (866) 972-5287 (or in Atlanta at 770-717-5100).