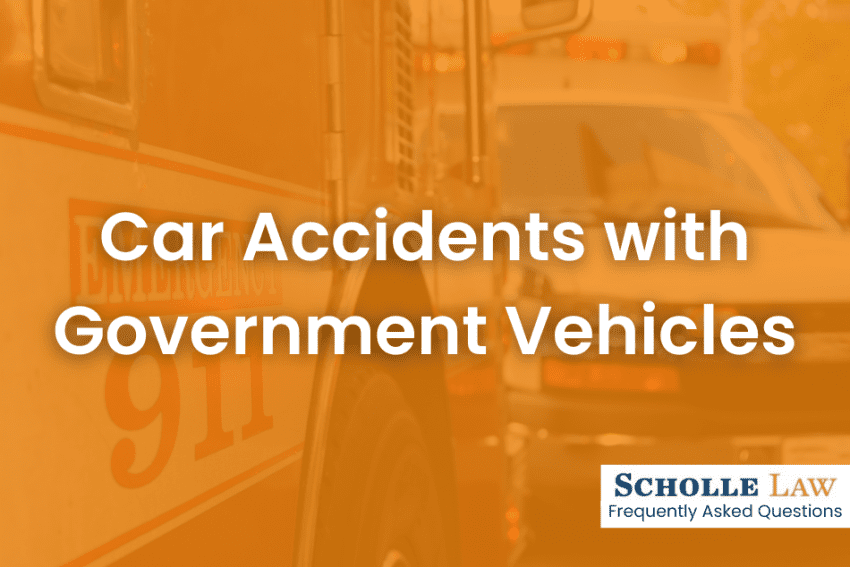 There are numerous government entities in Georgia that own and operate vehicles that are governed by these special rules, so it’s common for people to come to us with questions about an accident caused by city, county, state or federal employees.

Georgia has unique rules and procedures for injury claims involving vehicles owned and operated by cities, counties and the state.

Accidents caused by local and state government vehicles are governed by special rules and if the proper procedures are not followed, an injured party can lose their right to file a claim or a lawsuit—and potentially walk-away with no recovery for the damages caused by the negligent government worker.

Additionally, there are special rules for federal government vehicles.

Anyone who is involved in a car accident with government vehicle should immediately consult with an experienced accident and injury attorney. If the proper procedures are not followed and deadlines aren’t met, then an injured person could have their claim dismissed and be left without any opportunity for recovery or damages for medical bills, lost wages, pain and suffering and more.

In the event that a claim cannot be settled, Georgia law generally provides for a 2-year statute of limitations. This means that an injured party only has 2 years from the date of the accident or injury to file and serve a lawsuit against a private individual or defendant(s).

After a lawsuit is filed, it is possible that the case may still settle, be dismissed or make it all the way through the litigation process and be tried in front of a judge or a jury, ultimately resulting in a verdict and possible judgment for damages.

This overview is not very specific, but it roughly explains how most motor vehicle accidents are resolved in the state of Georgia.

The main distinctions between car accidents between private, non-government drivers versus claims against a governmental entity is:

What are the deadlines for government negligence claims?

As previously mentioned, a car accident claim against a private party must be made before the 2-year statute of limitations expires. However, accident claims against cities, counties and the state government must follow a notice requirement called an Ante Litem notice.

Generally, this notice requirement means that claims against government entities must be noticed in a time period that is shorter than the general state of limitations under Georgia law. This time period varies depending on whether the claim is against a city (municipality), a county or the state of Georgia.

In Georgia, negligence claims against the state of Georgia or a county government must be presented to the appropriate agency within 12 months (O.C.G.A. § 36-11-1). A claim against a local city or municipality in Georgia requires an ante litem notice be sent to the municipality or city within 6 months from the date of the accident or injury. (O.C.G.A. § 36-33-5)

If a lawsuit is able to be filed, it will generally have to be filed within the two-year statute of limitations.

Not only does this notice requirement have a strict time limit, but more recent developments and changes in the law also require the note to specify the amount of monetary damages that the injured party is seeking for their damages.

Who can be sued in a car accident claim involving the government?

The other main difference regarding these types of claims is the fact that depending on the type of claim, Georgia has a fair amount of statutory protection (aka, “sovereign immunity”) for certain state entities and employees. These protections often preclude these agencies from being sued or named as defendants in personal injury and car accident lawsuits.

The good news for most accident victims is that Georgia’s Tort Claims Act recognizes certain exceptions regarding when a government office or employee can be sued, including one for car or truck accidents caused by negligent government employees.

Under the act, plaintiff’s can pursue an automobile negligence case against a local or state government, but the named defendant must be the government entity (such as the Georgia DOT, Georgia State Patrol, etc.) and not the negligent employee (such as the officer, utility workers, etc.). Additionally, these lawsuits may be subject to recovery limits of $1,000,000 per person and $3,000,000 in aggregate.

Examples of Vehicles Owned and Operated by Cities and Municipalities

What kind of city-owned and operated vehicles are frequently involved in automobile negligence claims?

That is a great question.

The law does not treat these vehicles differently. If they are owned and operated by a municipality, then they will be subject to these guidelines.

What are some examples of county-owned vehicles?

County-owned vehicles can include law enforcement (sheriff) vehicles, utility vehicles, fire and safety vehicles and vehicles owned and operated by the various departments that a county may have such as parks and recreation.

Again, the law in Georgia does not treat the types of vehicles different from one another. So, if you are hit by a county land surveying vehicle, you will follow the same procedures as if you had been hit by a county-owned fire or police vehicle.

A claim against a Georgia county also requires an ante litem notice to be sent to the appropriate county contact within 12 months of the accident or injury. O.C.G.A. § 36-11-1 sets out this requirement. This timely filing of this notice is of utmost importance to anyone with a potential motor vehicle accident case that was caused by a county employee in Georgia.

In some situations, parties may have injuries that take many months or even years before they are fully healed. Even in cases with long term injuries or disabilities, an injured party should consult with a lawyer as soon as possible to make sure that an issue like an ante litem notice is dealt with correctly.

There have been many cases in Georgia where an injured plaintiff was unable to recover damages against a government agency because they did not file the correct type of notice within the time period.

Car accidents with government vehicles like mail carriers and postal workers are surprisingly common. United States mail trucks and postal vehicles are considered federal vehicles that aren’t subject to Georgia’s Tort Claims Act. United States Postal Service (USPS) vehicles are operated and owned by the federal government. As such, claims involving the federal government are subject to their own rules and requirements under the Federal Tort Claims Act (or FTCA).

To pursue an FTCA claim involving any negligent federal employee, an injured party must go through a confusing and voluminous series of federal laws in which there are too many exceptions and rules to address in this general discussion of accidents involving government-owned vehicles.

While FTCA claims often involve postal vehicles, there are many other federally-owned vehicles that may give rise to an FTCA claim such as military vehicles, federal law enforcement vehicles and vehicles owned and operated by the numerous other federal departments engaged in their daily work in the state of Georgia.

Federal car accident claims and injury cases are far different than claims against a private individual or even a state, city or county government. There are important rules and regulations to consider when pursuing these claims—including the fact that they are litigated in federal court.

The key take-away on this issue is that there are many complications that can arise in an FTCA case, so please consult with an experienced lawyer if you have been seriously injured in an accident involving a negligent federal employee or federally-owned vehicle.

Generally speaking, filing a lawsuit against a county or municipal employee in Georgia is difficult because of the protections offered by sovereign immunity, which protects county and city employees who are accused of negligence or some other tort while acting in their ministerial capacity as city and county employees.

Fortunately for accident victims, the Georgia State Assembly has created waivers for sovereign immunity in the case of automobile accidents involving county and city vehicles operated by county and municipal employees. Georgia Code § 36-92-2 lays out the waiver and the amounts of damages that can be sought without triggering the sovereign immunity defense:

This law provides that cities and municipalities can obtain excess coverage when the allegation of damages may be higher than the statutorily prescribed limits. These amounts are not “damage caps,” per se—rather they are the amount of damages that can be claimed against a city or county before triggering sovereign immunity.

Clearly, this topic is very complicated. In a catastrophic accident where damages can significantly outweigh the waiver amounts, an experienced car or truck lawyer should be consulted for a full, comprehensive analysis of whether an injured party may be able to recover more than the applicable amounts as laid out by Georgia statute.

When Should You Consult a Georgia Car Accident Attorney?

If you were in an accident with a city, county, state or federal government vehicle in Atlanta or elsewhere in Georgia, you are most likely going to be confused by the various rules and regulations that may govern your ability to bring an injury claim. Being seriously injured is bad enough, but trying to navigate the ins and outs of an injury claim involving a government entity is confusing and frustrating at best.

If you or a loved one are in this situation, speak to an experienced injury lawyer before trying to handle it on your own. The rules governing these cases are rigid and unforgiving. Any mistake can prevent you from obtaining the compensation that you may be entitled to.

At Scholle Law, our knowledgeable Georgia car and truck accident attorneys fully understand the law when it comes to injuries caused by city, county, state or federal government employees. We will advise you and inform you about all the legal requirements that must be met for you to recover all that you are entitled to under Georgia law.