Should I give a recorded statement to the insurance company? 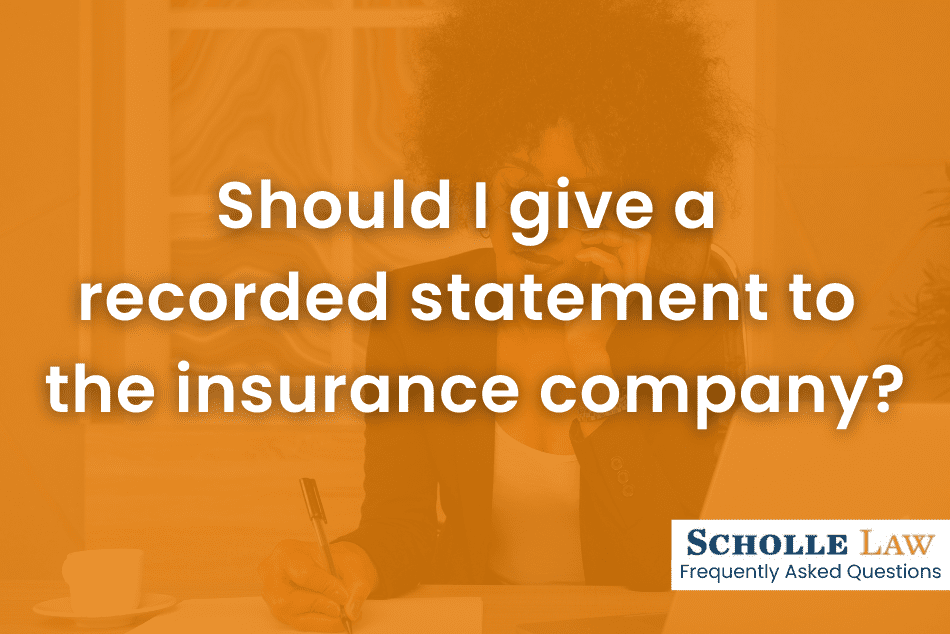 When and why should you give a recorded statement to the insurance company?

Giving a recorded statement to an insurance company after a car accident is a nerve-racking experience. You suspect that they are “lying in wait” for you to provide one wrong answer that will forever be used against you.  Even worse, what if you give honest and correct answers that are misconstrued and used by the insurance company to their advantage?

These are valid concerns and need to be addressed.

In this article, we hope to provide answers to some common concerns about providing a recorded statement to insurance companies that will put your mind at ease and supply solid practical direction.

So, let’s get started.

Can you choose to not be recorded?

There is no law or rule that says you have to do this. The only time you may potentially have an obligation to provide a statement to the insurance company is when you are using your underinsured or uninsured motorist coverage. In these cases, you are proceeding with a claim through your own insurance policy because the at-fault driver either doesn’t have enough insurance to cover your loss or has no insurance at all. Since you are going through your own policy, there may be a contractual obligation for you to provide a statement.

It is our experience that this question is not always as cut-and-dried as the insurance company makes it out to be. If your insurance company has you backed up against a wall by saying you have to provide a recorded statement, you may want to seek legal counsel going forward.

While a recorded statement isn’t typically required, it can help expedite the resolution of your claim — in some cases. Your side of the story is usually a necessary condition for the adjuster to accurately assess the accident facts and make a liability decision. Traditionally, this is done by way of a recorded statement.

Furthermore, your side of the story matters. The adjuster is going to make a liability decision based on all of the information obtained. If you don’t provide your version of events, guess who’s version is the only one heard? That’s right: the other driver.

But then again, providing your version doesn’t automatically mean you have to give a recorded statement. There are other alternatives.

How to provide information without a recorded statement

Unless you immediately hire an attorney after a crash, eventually you must talk to the insurance company to make your claim. You can’t make a claim without communicating with the insurance company sooner or later. If you prefer to not provide a recorded statement, there are other alternatives.

First, tell the adjuster you don’t want to give a recorded statement of what happened. In this case, they can ask you the same question over the phone. The only difference is that it isn’t being recorded. The adjuster will put your answers in his or her claim notes.

Second, the adjuster can send you a list of questions to you by email and you can answer them this way.  This will give you more time to think about your answer and be thoughtful so as not to accidentally give a wrong answer by mistake.

Third, your version of events may already be noted in the police report. If that’s the case, it may be sufficient to answer the basics of what the insurance adjuster needs to know. If the police officer documented the report incorrectly, you might need to consider how you will get the corrected version to the adjuster. In this case, you might consider doing one of the alternatives already discussed.

Disadvantages of giving a recorded statement to insurers

When talking to an insurance adjuster, it’s important to remember that anything you say can and will be used against you if it casts your claim into question. This is why it’s vital to say what you mean, but also to think about what you say before you say it.

Words can have different meanings to different people. Unclear or vague descriptions are confusing to the adjuster and ultimately create more questions. Ambiguity will not be in your favor. More times than not, this happens when the adjuster is asking questions to do with the time and space of the accident.

Below is an example of how an recorded statement answer about time can be misconstrued by the insurance adjuster:

ADJUSTER: How much time passed between when you first saw the other car pulling in front of you and your attempt to apply brakes?

YOU: Umm…I’m not really sure. Probably 10 seconds.

ADJUSTER: So you saw the car turning left into your path of travel and from that point it was 10 seconds before you applied brakes?

The problem here is that 8 seconds doesn’t sound like much time. But let’s think through that.

It becomes clear that it probably didn’t take 8 seconds for you to respond and press the brake. It was probably more around 1 to 3 seconds. But since, by your own admission, you said 8 seconds, then the adjuster might believe that you had plenty of time to make an evasive maneuver. So why didn’t you?  You have essentially admitted to the adjuster that you are partially responsible for causing the accident.

Another problem with answering questions by insurance adjusters arises when they ask questions about space or distance.

For example, imagine an incident in which an object falls off of a truck. The truck is in front of you, and the object falls directly into your path of travel. You are unable to avoid running over the object. You are surprised by the falling object and lose control of your car, crashing into an embankment on the shoulder of the road.

See the example conversation below in which the adjuster is asking questions to do with space and distance.

ADJUSTER: So, you were behind the truck in traffic?

ADJUSTER: Approximately how fast were you traveling?

ADJUSTER: Okay. And what would say was the distance between you and the truck in front of you?

YOU: Hm…let’s see. Maybe about half a car length.

ADJUSTER: So, you were going approximately 55 mph and about half a car’s length behind the truck?

YOU: Yes, I think that’s right.

The problem here is apparent. The person who is answering the questions doesn’t fully realize what they’ve just communicated. Keep in mind that half of a car length is usually less than the height of the average adult. To put it plainly, that’s quite close.

Imagine it this way:

If the vehicles weren’t moving and were half of a car length apart from each other, you possibly could stretch out both arms and touch both vehicles at the same time.

So, did the person really mean to say they were going 55 mph and following that close?

In driver’s education class, we are taught that the general rule for following another vehicle is 1 full car length of distance for every 10 miles per hour of your own speed. If you are going 55 mph, this means you should have at least 5 ½ car lengths of following distance.

Think about what you’re saying before you say it. Always do your best to answer with the most accurate answers regarding time and space.

Don’t be wishy-washy. If you are going to proceed with a recorded statement, then answer the questions. Don’t agree to give a statement and then dance around the answers. If there’s nothing to hide, tell your side of the story just as it happened. If you feel there is a reason to be concerned about providing your statement, then hold off on giving one until you have professional input or legal representation.

Otherwise, let your yes be yes, and your no be no. Don’t equivocate or vacillate. At the same time, be careful. Just as when you are providing a factually correct statement to a responding police officer, you always want to make your answers easy for the adjuster to understand. Over talking or rambling about what happened in the accident can sometimes cause more questions in the adjuster’s mind than answers. It’s best to keep your answers simple, short and sweet.

Perhaps you feel bad that the accident that happened, even though it wasn’t your fault at all. Caring and empathetic people who couldn’t avoid hitting a car that turned into their path will sometimes rush up to the at-fault driver, saying how sorry they are for hitting them. Later, the at-fault driver will tell their insurance company how much you apologized for the accident.

What you probably meant is that you hated that this happened and you wanted to make sure they were okay. However, in the context of an insurance adjuster collecting evidence, the word “sorry” can seem to imply that you have some kind of guilt about the accident. As a result, an adjuster may be compelled to ask some clarifying questions, such as: “Are you sure you didn’t do anything to contribute to the accident?”

For some, this could turn into “overthinking.” As a fact, you know you did nothing wrong. You know you were not speeding through an intersection. But you’re a nice person. So, you start thinking: Is it possible that I may have been going 5 or 10 miles over the speed limit and didn’t realize it? You don’t believe that you were. But as an honest person, you admit to the adjuster that it is possible.

In an adjuster’s world, you just admitted that you think you may have been speeding. That is not what you meant, but that is what he or she will note.

Should you provide a recorded statement to the insurance company or not?

For the most part, recorded statements can be helpful to an adjuster as they move your claim further along through the claims process. That being said, recorded statements are also commonly used to trap unsuspecting claimant’s in their own words. As a result, we advise our clients to be reluctant to give a recorded statement when much of the same information can be provided without one.

Nearly every insurance carrier is going to ask for a recorded statement after an accident. The questions are going to be very detailed and often difficult to answer.

You should also know that the adjuster is also going to ask you if you were injured. Obvious injuries always get a resounding “yes.” However, it’s not uncommon for folks who are sore from an accident to say they were not hurt. Maybe you weren’t hospitalized, so you answer “no.” So the adjuster documents that you admit to having no injuries or pain from this accident, and moves toward closing their file on the bodily injury side.

The truth is, even though you were not hospitalized, you may have been experiencing pain ever since the day of the accident. On top of that, you now have medical bills and you aren’t sure who is going to pay them. Moreover, what if you have an injury that isn’t immediately known?

As harmless as the question “were you injured” sounds, you now have a problem. You were recorded saying you weren’t hurt, and insurance companies will try to minimize pay-out wherever possible.

Unfortunately, recorded statements are commonly used against a claimant later down the road. The insurance company wants to save money and often does so at the expense of the victim. Don’t let the insurance adjuster talk you out of what is rightfully yours. Your best resource is always going to be experience. Hire an injury attorney who is experienced with handling the insurance company directly.