What is a Recorded Statement, and Why Should I Care? 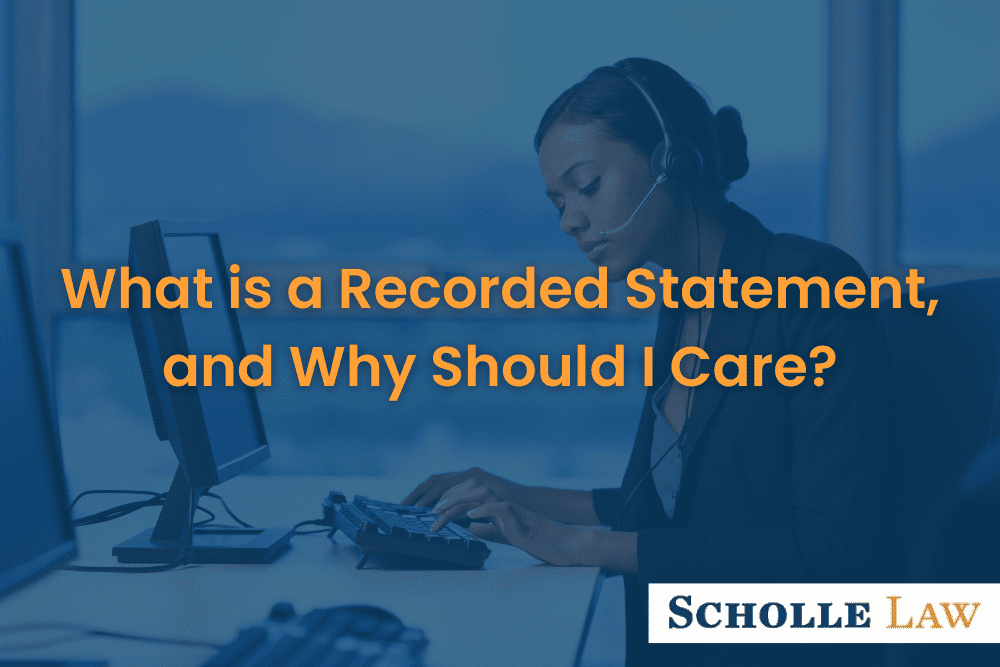 People all over the United States get into car accidents every day.  They call the liable insurance company and get funneled through to a variety of different insurance adjusters who help them work out various claims related to the wreck.  In a single wreck, a claimant may ultimately talk to 4 different adjusters from just one company, and that’s before their case randomly gets assigned to a new adjuster for any number of reasons.

You might have a bodily injury adjuster, a medical payments adjuster, a property damage adjuster and (if the damage is sufficient) a total loss adjuster.  It’s all very confusing and often people may not know which adjuster they’re reaching or that there’s a difference – they just want someone to help them with their claim.

What is a Recorded Statement?

Once they finally reach the correct adjuster, it can be a big relief. However, the adjuster is not usually friendly, pleasant or sympathetic to the caller.  In their inexperience, many people overlook a very important moment called a “Recorded Statement.” All of us are used to being warned that we’re being recorded when we call a big corporation.  The requirement has integrated itself so thoroughly into the corporate culture that, for most of us, it’s just background noise.  When you call customer service for your bank or credit card or your internet provider or any number of other corporations you deal with on a regular basis, you’re warned repeatedly that you’ll be recorded.  It’s the cost of doing business.  This is, in large part, thanks to states like Florida in which it is illegal to record a conversation if both parties have not acknowledged and consented to the recording.  Since companies don’t always know what state their callers are calling from, they warn everyone.  And it all seems very harmless.

What happens at an insurance company is far from harmless, however.  When you call your cable provider, you’ll most likely never be confronted with a recording of yourself two years after the conversation took place.  But that’s exactly what can happen when insurance companies ask you for a Recorded Statement.  Most often, an injured party or a person with property damage to their vehicle will call an adverse carrier (the other person’s insurance) because they’re looking to have their medical bills or their repair compensated.  They get the normal litany of warnings and general information about their call and then they finally reach the adjuster they need to talk to.  Maybe the adjuster actually reaches out to them and calls them.  Either way, the person ends up on the phone with an adjuster.  What follows is a brief conversation where the adjuster explains that they need some additional information about the accident and they’d like to have permission to record the conversation.  It’s all very easy and pleasant.  Nothing seems threatening about the request and, after all, they’re just asking for more information so they can help.  Unfortunately, that often is not the case.

What they don’t realize is that they’ve just consented to a specific Recorded Statement which will be saved into their file either as an immediate basis to deny the claim or to use against them later as a basis to pay them less to settle their case.  Recorded Statements are a tool used by insurance companies to try to catch someone saying anything inconsistent that they can use to avoid paying them.  The adjusters are trained to be extremely conversational and concerned but what they’re looking for is information to use against the caller.  And once that information has been permanently preserved in a recording, that recording can come back to haunt the caller.  Seldom in any of our cases have we ever seen a recorded statement that has benefited our client.  Most often, the Recorded Statement is brought out in order to try to prove through a prior statement that our client isn’t injured as severely as they claimed or in the same way that they claimed.  Sometimes it’s used for various coverage defenses.  In any case, it’s a sleeper agent in a case that gets activated when the insurance company wants to get out of paying someone who would otherwise have coverage.

The bottom line is that you should always ask your Duluth personal injury attorney before you allow an insurance company to take a Recorded Statement.  If a client gets recorded early on saying that their back doesn’t hurt but then two days later it does, that prior Recorded Statement can have a serious financial impact later in their case.  Even if it seems like the adjuster is on your side, they’re not.  Your attorney is on your side and your attorney’s advice is what will navigate you through a personal injury claim successfully.