What Is Considered “Admitting Fault” After a Car Wreck?

If you are involved in a car accident in Atlanta, the moments after can be a confusing blur. You may be injured, worrying about the damage to your car, and wondering what information and evidence to gather. Of course, you will also likely interact with the other driver and any passengers in the other car. While it is important to trade information with the other driver, what you say to them can damage any personal injury lawsuit you may pursue in the future.

As natural as it may be, apologizing for the car wreck – even when you clearly were not at fault – can easily be construed as you taking blame for the collision. Even if the accident was your fault, saying “sorry” can be used against you by your insurance company, the responding police officers, the jury if your case goes to trial, and others.

Instead, call an Atlanta car accident lawyer after your wreck. At Scholle Law, our attorneys can provide guidance regarding what to say to your insurance company and others at the scene of the collision. We have over 20 years of experience helping injured victims get the compensation they deserve – and the first step is to know what to say.

Give us a call at (866) 592-1296 or contact us online today for a free, no-obligation consultation with a Georgia car accident attorney.

What NOT to Say After a Car Accident 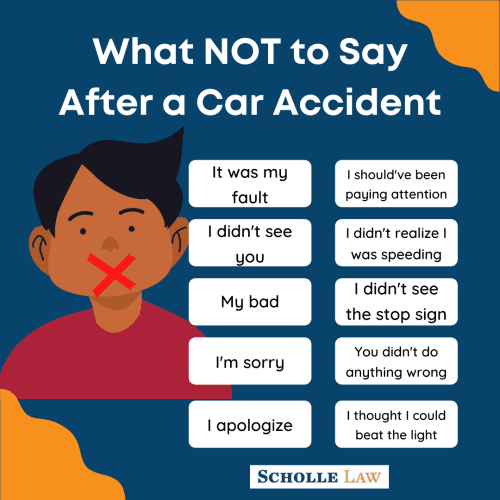 After a wreck, it may seem like a natural reaction to apologize in some way to the other driver. While politeness is considered a virtue, it can be detrimental after an accident. While “I’m sorry” is the most obvious apology to avoid, there are many others.

Any of these phrases could hinder your ability to seek compensation later on:

It is fine to express concern about the injuries that may have affected you, the other driver, and/or any passengers in either vehicle. In fact, being kind and courteous can help alleviate any anger or frustration you or the other driver may feel.

Just remember: Being courteous should NOT include any kind of apology or admission of fault.

What You SHOULD Say After a Car Accident

After a wreck, it is critically important that you call 9-1-1 to report the incident. After reporting the collision, speak with the other driver and determine if they or their passengers suffered injuries. Even if there were injuries, do not apologize! In fact, you should avoid saying too much at the scene altogether. Instead, exchange contact and insurance information.

When the police and other first responders arrive, make sure that any statement you make is factual. Avoid any kind of opinion or assumptions about the collision. You should also avoid blaming the other driver or admitting fault for the accident. The police are there to investigate the wreck and determine who is at fault. The police report will be used as evidence in any future legal action, and they are difficult to have revised – especially the conclusion of who is at fault.

Regarding paramedics, do not outright refuse treatment because you are “not injured.” After a wreck, adrenaline will be pumping, and you may not realize you have sustained injuries. Instead, allow them to inspect you, and follow any medical advice they provide.

In short, remember that police are trained to investigate car wrecks, and paramedics are trained to treat injury. As you most likely are not an expert car accident investigator or a medical professional, your best option is to let them do their job and provide only factual information when asked.

What Do I Say to the Insurance Company?

You are legally required to report any car accident in which you are involved to your insurance provider. However, you need to be especially careful about what you say to the agent. Insurance companies are businesses first. That means they are looking out for their bottom line more than they are looking out for you. As such, they will do whatever they can to deny your claim – including twisting your words.

The insurance agent will ask leading questions and will record your call. If you admit fault, or even hint at being at fault, they will use that recording as evidence that they are not responsible for any expenses or financial loss you may have suffered due to the wreck.  Instead, give only facts about the collision. Tell them as little as possible to avoid implicating that you were at fault. If possible, file your claim online so you are not speaking directly with someone who is recording you.

Even better, speak with a Georgia car accident lawyer before you call your insurance company. An experienced attorney can provide guidance regarding what to say. Even better, your lawyer can communicate with the insurance adjuster on your behalf. That way, you can avoid saying anything that could directly or indirectly put the blame for the accident on you.

I Accidentally Admitted Fault. What Now?

In the confusion after a car accident, it may feel natural to apologize, even if it is just for the inconvenience of being in a collision. If you apologize or otherwise admit fault, it can make any attempt to recover compensation much more difficult. However, it is not impossible.

As a simple example, say you are in a rear-end wreck, but your brake lights were not functioning properly. A jury awards you $100,000 in damages but finds you 20 percent at fault due to your malfunctioning tail lights. As such, you will ultimately receive $80,000 in compensation.

The moments after a car wreck are stressful, to say the least. Knowing what to say and to whom can be confusing, and saying the wrong thing can severely damage your ability to seek compensation later. That is why it is so important to speak with an experienced lawyer before you speak to your insurance company.

At Scholle Law, our attorneys have decades of experience representing injured clients after a collision. We know how to deal with the insurance companies to get you the compensation you deserve. Give us a call at (866) 592-1296 or contact us online today for a free, no-obligation consultation with a Georgia car accident lawyer.