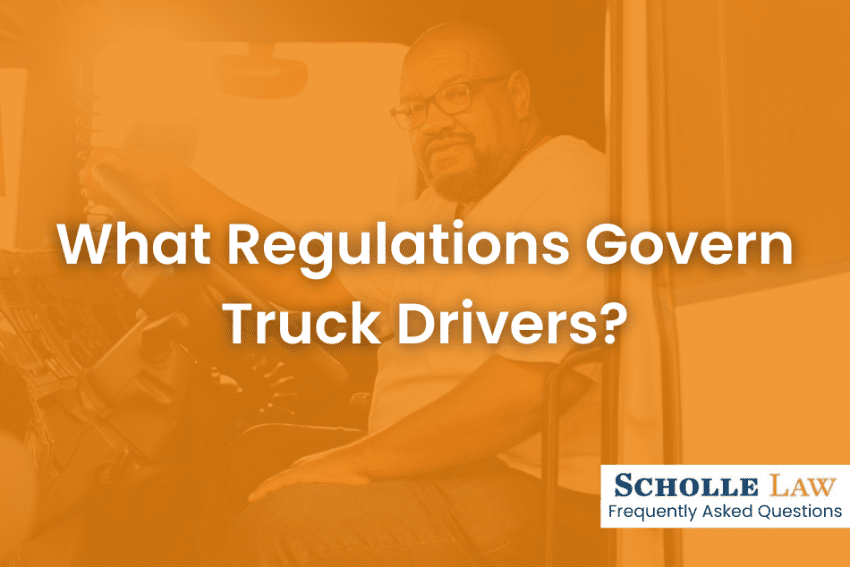 Generally speaking, truck drivers are governed by a set of rules called the Federal Motor Carrier Safety Regulations. These regulations are found in a subchapter under Title 49 of the Code of Federal Regulations and are comprised of hundreds of rules designed to keep both interstate and intrastate commerce and transportation safe and uniformly regulated across the continental United States.

While individual states may have some of their own additional regulations which apply to truck drivers, the vast majority of the rules which truck drivers and the companies that employ them must obey are found within the Federal Motor Carrier Safety Regulations.

WHO IS A TRUCK DRIVER?

While the term “truck driver” generally makes people think of drivers of a “semi-truck” or “tractor-trailer,” the Federal Motor Carrier Safety Regulations actually apply to an even broader set of persons. Anyone driving: a vehicle designed to transport more than 8 persons (including the driver) for hire, any vehicle designed to transport more than 15 passengers (whether for hire or not), any single or combination vehicle with a Gross Combination Weight Rating (GCWR) of 26,001 pounds or more, and any vehicle used to transport certain designated hazardous materials must nearly always hold a valid Commercial Driver’s License to legally do so.

In order to obtain a Commercial Driver’s License, a driver must have undergone some sort of training and education on driving a commercial motor vehicle, must have a certificate from a doctor declaring them medically fit to drive a commercial motor vehicle, and pass both written and skills tests, amongst other requirements. There are actually three different classes (A, B, and C) of commercial driver’s license which each allow you to legal operate different types of vehicles dependent on conditions such as GCWR, number of passengers, and other factors. Transportation of hazardous materials or other certain types of vehicles also require specific endorsements.

For a truck driver who has a valid Commercial Driver’s License and is operating a Commercial Motor vehicle subject to the Federal Motor Carrier Safety Regulations, there are a number of rules the driver must follow.

Compliance with the Hours of Service regulations used to be entirely dependent on written logs kept by the drivers themselves. With the technology now so readily available, however, most commercial motor vehicles, especially tractor-trailers, are required to have “Electronic Logging Devices” installed which are used in conjunction with the drivers’ logs to document compliance. An Electronic Logging Device records information from the truck’s engine and documents when the engine is running, when the truck is in motion, how far it is driven consecutively, and how long the truck has been operating. This information is stored automatically and can be used to prove whether or not a driver was actually complying with the Hours of Service regulations.

Commercial motor vehicle also have both size and weight limits, or more accurately, ratios, imposed on them by both federal and state regulations. If there is not sufficient distribution of weight across a large enough surface area (like multiple widely spaced axles), trucks can actually damage or destroy roadways because the surface of the concrete or asphalt is not designed to withstand that amount of force.

An even bigger concern is bridges, which require upkeep and maintenance and are costly to begin with. Extra wear and tear from overloaded trucks will cause them to wear out faster, or even fail. Truck weight also has a bearing on interstate commerce and the taxes that shipping companies have to pay on loads destined for a particular state. Trucks are often weighed at the borders of states to not only ensure compliance with the weight restrictions of that state, but also to ensure that trucking companies are paying the correct taxes which help maintain the roads that their heavy trucks are wearing out.

Commercial motor vehicles that transport passengers, such as buses, also have their own unique regulations. Not only do the hours of service regulations for the drivers differ, but the drivers are also required to have a completely different endorsement or class of commercial driver’s license. Given the risk a careless or negligent driver poses to their passengers, a commercial driver’s license is required to drive any vehicle which can carry 16 or more passengers, regardless of whether the service is free or not.

For drivers or companies who make a business out of transporting people for hire, the passenger limit goes down to 9 or more, meaning that even small shuttle drivers will usually be subject to both state and federal licensing and driving regulations. For transporting certain hazardous materials, like chemicals or explosives, or certain types of special loads, like double or triple trailers, truck drivers also must legally have special endorsements on their commercial driver’s license which authorize them to transport those dangerous loads.

Most commonly, you would encounter this requirement for drivers of tanker trucks, which are especially dangerous as the load is not only flammable but is a liquid – which means that the load shifts as the driver operates the vehicle, increasing the risk and severity of collisions.

Commercial motor carriers, or trucking companies, are required to test any newly hired drivers for drugs before they may allow them to drive a commercial motor vehicle. Even beyond testing new drivers, trucking companies are required to randomly test at least 10% of their drivers annually on a continual basis. If a driver is involved in any sort of accident or incident in which an injury was reported, a vehicle was disabled, or the truck driver got a ticket, the trucking company will also likely have to conduct alcohol and drug tests.

Trucking companies are required to maintain certain minimum amounts of insurance coverage on all of their trucks. These limits are much higher than normal automobile policies because, again, trucks have the potential to cause much greater damage and injuries in an accident. Under federal law, trucking companies must usually have at least $750,000 in coverage on their trucks. If the truck is carrying oil, the limits required under federal law are $1,000,000.

Transport of certain hazardous materials requires coverage of $5,000,000. The only time that commercial motor vehicle will sometimes have lower coverage is when they are an intrastate carrier (meaning they don’t transport across state lines) transporting non-hazardous materials. In Georgia, those commercial motor vehicles are only required to have coverage in the amount of $100,000 per person and $300,000 per accident. Regardless of whatever lower limit state or federal regulations may impose, however, insurance companies will often require tractor-trailer rigs to carry coverage of $1,000,000, regardless.

WHAT TO DO IN AN ACCIDENT

Because there are so many different rules, both state and federal, that govern trucking, passenger transport, and various forms of both interstate and intrastate commerce, it is vital to seek the help of an experienced attorney if you’ve been injured in an accident involving any sort of vehicle which you think may be a “commercial motor vehicle.” Especially in the Atlanta area, tractor-trailers abound and the potential for a collision with a semi-truck or other large vehicle is high.

An experienced attorney will help preserve all of the available evidence and will know what rules and regulations the vehicle, its driver, or the company may have violated through carelessness or even knowing disregard. Trucking companies are aggressive, highly litigious, and obsessed with keeping their costs as low as possible and they will often take advantage of injured persons who don’t know any better and aren’t equipped to fight them. At Scholle Law, we have years of experience fighting trucking companies to make sure that our clients are compensated for their injuries. If you’ve been injured in an accident with a truck, we would love to talk to you about your options and the ways that we can help you recover.