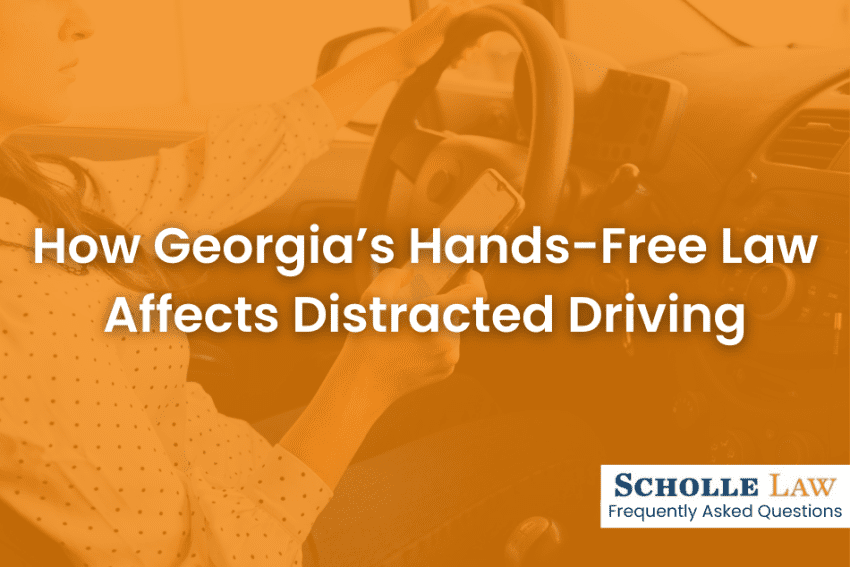 On July 1, 2018, Georgia Governor Nathan Deal signed the Hands-Free Georgia Act into law. Simply put, holding electronic devices in your hand while driving is now against the law in Georgia. The primary aim of the law is to reduce accidents caused by drivers who are distracted by their cell phone while driving. Punishment for disregarding the new law can include fines of up to $150 for those with multiple offenses and up to 3 points on your driver’s license.

Despite the debates over how effective the Act would be in decreasing accidents, statistics show that tickets are up and accidents are down. It’s reported that state agencies issued over 25,000 tickets in the first year of the law’s implementation. This is an average of 68 tickets per day (not including local agency data). Admittedly, a hands-free law is difficult to enforce. Nonetheless, it certainly helps keep honest people honest and therefore lowers the overall number of distracted drivers on Georgia’s roads.

Below is a summary of the restrictions and allowances under the new hands-free law in Georgia.

When it comes to cell phone usage while driving, the Hands-Free Georgia Act is relatively clear and easy to understand. For an exhaustive and detailed explanation on the subject, the Governor’s Office of Highway Safety in Georgia provides all specifics available on the subject. In this article, we’ll breakdown the key changes into convenient bullet points that speak directly to the most common questions on the topic:

The Hands-Free Georgia Act and Your Car Accident Claim

The accusation of being on your cell phone while driving is a sword that cuts both ways. If you are in an auto accident due to another driver’s negligence, you may advise the responding police officer that you believe the other driver was on their cell phone. Truthful or not, the other driver may accuse you of the same thing. One thing is certain:

All information supplied to the responding police officer will be seriously considered. If an independent witness to the accident cohobates an accusation of distracted driving, the accusation will most assuredly become part of the officer’s narrative.

Eventually, your claim will become processed through the insurance company and put into the hands of a claims adjuster. Coverage and liability is the first order of business for the adjuster when receiving a new claim. Usually, an adjuster will not take into account accusations of cell phone use while driving unless corroborated by a witness or the police report. However, the accusation is a bell that can’t be unhea

rd by the adjuster.

Keep in mind that you should avoid incriminating yourself by oversharing about any possible mistakes you might or might not have made in an accident. Good people always want to do the right thing, and they should. At the same time, if you are uncertain as to what part you might have played in causing an automobile accident, you should seek professional legal advice going forward to properly protect your version of the truth.

Anything you say at the accident scene or to an adjuster on the phone could be used against you later.

If the accusation is the other way around and you are accusing the at-fault driver of being on their cell phone, understand that you will need more than accusation to make your case. For starters, be sure to tell the reporting officer. You never know when a witness may corroborate your story. If you have a video recorder attached to your vehicle, review the footage to see if the other driver was seen on their cell phone.

After the accident, the driver may have admitted to being on their cell phone and this admission may have been captured by the camera in your car. Though it’s the police officer’s job to investigate if a witness can corroborate your story that the at-fault driver was on their cell phone, you should also check on this yourself. Don’t leave this up to the responding officer only. Talk to the witnesses at the scene and ask if they saw the other driver on their phone.

If you have been injured in a wreck caused by texting and driving, call Scholle Law today at (866) 592-1296 or contact us online to schedule your free consultation.