What Qualifies for Punitive Damages in Georgia? 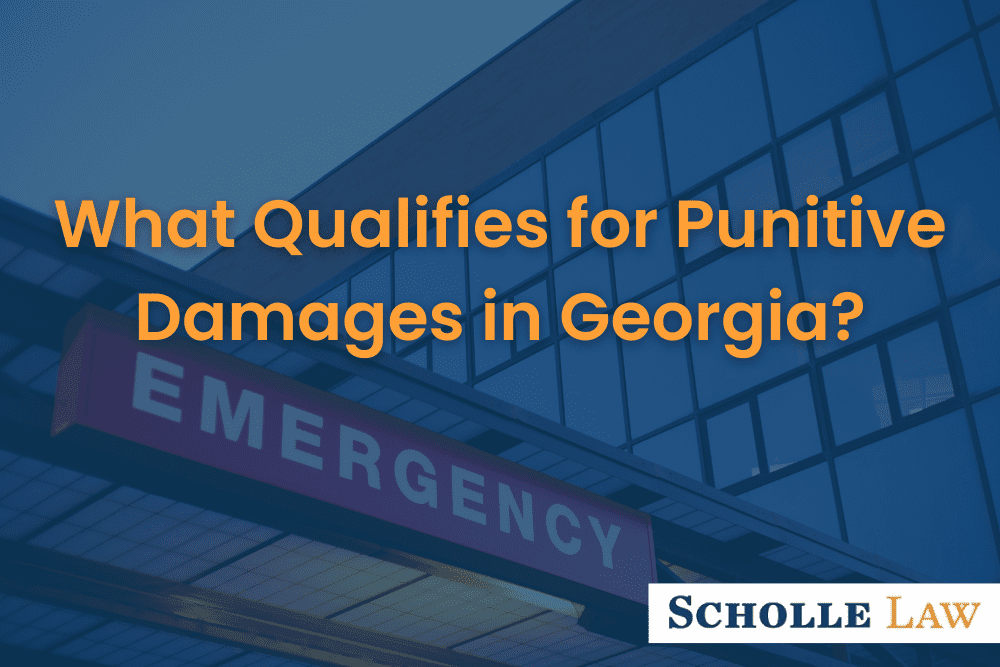 What are the basic legal requirements for punitive damages?

The plaintiff must prove that the defendant was an active tortfeasor—i.e., the wrongdoer did something that harmed the plaintiff. For punitive damages, a defendant must have taken action (or actively refused to take action) that directly caused the plaintiff’s injury. Inaction is insufficient.

This active tortfeasor requirement limits who can be sued. Others who are wrongdoers, but are not directly responsible for causing the plaintiff’s injury, can be required to pay compensatory damages, but they would not be liable for punitive damages.

Because the intent is to punish the defendant, the law requires that the plaintiff must prove “by clear and convincing evidence that the defendant’s actions showed willful misconduct, malice, fraud, wantonness, oppression, or that entire want of care which would raise the presumption of conscious indifference to consequences.”

This is a significantly higher standard of proof than what is required for most civil cases—a “preponderance of the evidence.”

In years past, who was considered the active tortfeasor was narrowly applied. However, in 2020, the Georgia Supreme Court broadened the rule, essentially changing what qualifies for punitive damages, in Reid v. Morris.

In Reid, an injured-in-an-accident plaintiff sued a drunk driver and the drunk driver’s passenger. The passenger, who was also intoxicated, owned the car and had given the driver permission (and the keys) to operate his vehicle. The trial court had found that only the driver was the only active tortfeasor who should pay punitive damages, but the state’s supreme court disagreed. The appellate court said that the passenger had taken enough sufficient actions that he could also be considered an active tortfeasor, and he, too, might have to pay punitive damages.

While the ruling is still too new to know its full impact, Reid may lead to a substantial expansion of punitive damages litigation.

What Types of Cases Can Include Claims for These Damages?

Generally speaking, punitive damages are not available for breach of contract claims, even if the breach is in bad faith. For example, punitive damages aren’t allowed if someone were to sue an insurance company for bad-faith denial of coverage. Instead, in that case, only compensatory damages would be allowed.

Additionally, punitive damages are not allowed against a deceased defendant’s estate: A defendant must be alive at the commencement of the litigation.

How Much Can You Recover in Punitive Damages?

There are both state law and Constitutional limits on the size of punitive awards. Georgia law caps most punitive awards at $250,000; however, there are three important exceptions to this limit.

First, product liability claims are not limited by the statutory cap. However, it’s important to note that in these cases, only 25% of the punitive damages, plus attorneys fees and costs, go to the plaintiff. The remainder of the award goes to the State of Georgia since the presumption is that the faulty product has injured the state’s population as a whole.

The cap also does not apply if the defendant was impaired because of their use of drugs, alcohol, or other substances at the time of the action that led to the plaintiff’s injury. While this clearly applies to drunk driving cases, the law is not limited to those cases, and the Reid case suggests it could apply to other claims.

A plaintiff who receives punitive damages may also be entitled to recover attorneys’ fees under a different statute, O.C.G.A. Section § 13-6-11.

What are the Requirements for Punitive Damages Claims?

In terms of deciding liability for punitive damages, Georgia law requires two (or even three) separate trial stages. In the first part of the trial, the trier of fact must decide if the plaintiff’s case has met the standard for what qualifies for punitive damages:

If the plaintiff has proven—with that clear and convincing standard of evidence—that the defendant harmed the plaintiff and should pay punitive damages, then the trial resumes.

In the trial’s second stage, because the trier of fact determines the defendant’s likelihood to harm others, the plaintiff may introduce evidence that might have been excluded in the first part of the trial—such as the defendant’s criminal history.

Substantively and procedurally, suits for punitive damages are complex. They are frequently brought but seldomly won. That’s why you need an expert in personal injury law, a plaintiff’s lawyer who has mastered both the substantive and procedural law.

If someone has injured you or one of your loved ones, call Scholle Law: We are a preeminent Georgia law firm that exclusively handles personal injury cases. With offices in Gwinnett County,  Midtown Atlanta, the Perimeter, and Decatur, we serve clients throughout greater Atlanta and Georgia. Please contact our office or call toll-free at 866-582-1302, or in Atlanta at 770-717-5100, to schedule a free consultation.