What Is the Difference Between Civil and Criminal Cases? 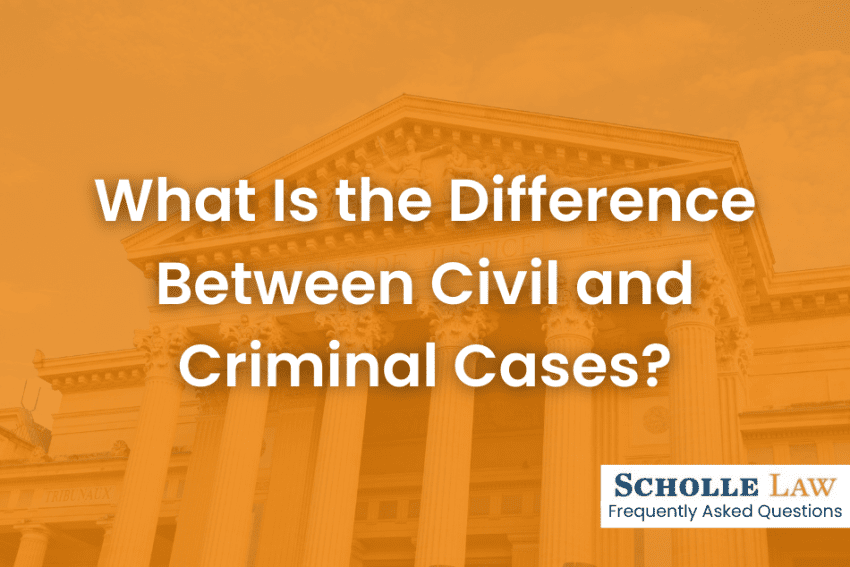 Georgia lawyers take pride in their profession and their responsibility of helping clients resolve Georgia civil cases and criminal cases. The history of the law is filled with scholarship and significant achievements. For instance, the Declaration of Independence, the U.S. Constitution and the Emancipation Proclamation were all written by lawyers. While lawyers are proud of their industry, it challenges non-lawyers with concepts that many lawyers take for granted.

At Scholle Law, our injury attorneys speak to people every day about their questions and concerns. We do so because we understand that legal issues can be overwhelming and confusing. In fact, many of the ideas behind our website’s articles come from real questions asked by real people. In this article we intend to provide an explanation of a topic that seems to confuse everyone. The following discussion of differences in Georgia civil cases and criminal cases highlights two very different aspects of the law.

Civil Cases Are Generally About Compensation

When a prospective client calls a personal injury lawyer, they are probably speaking to a civil attorney. Injury attorney are civil attorneys. They mostly focus on helping compensate injury victims for their damages. How do civil attorneys do that? Civil accident lawyers work to get their clients compensation (money). That may include money for things like medical bills, lost wages and pain and suffering. Compensation comes from resolutions achieved in pre-suit settlements and also by civil trial awards.

Personal injury lawyers are not the only types of lawyers that practice civil law. Business law, family law and real estate law are examples that generally do not include criminal elements. For instance, a business lawyer may be hired by one business to sue another business for breach of contract. Such a case could result in one company having to pay money to another company for a contract dispute.

A family lawyer is another good example of civil law at work. In a family law case the lawyers will be challenged to come to terms on child and spousal support (alimony). Outside of the significant issues with the custody matters, the lawyers will be focusing on money and property. Most people do not know that divorce cases can go before a judge or jury for a trial. These cases are usually resolved amongst the parties without a trial, but it is possible to have a trial in a divorce matter. Even if a judge or jury resolves the case, the issues decided will still relate mainly to finances and custody.

There are numerous other examples of civil law at work. These were just a few common examples suitable for this brief discussion. In conclusion, a simple explanation of civil cases: they generally involve people resolving conflicts regarding their families, money or property. More times than not, civil law involves money. Lastly and most significantly, typical civil cases do not involve jail or fines.

Criminal Cases Are Generally About Punishing and Deterring

Criminal cases may be easier to explain. Think of them as cases that can be brought against people and companies. Most common cases involving criminal law are cases involving people accused of breaking a law. In a criminal case, the case against a party or organization/business belongs to the government. Prosecutors file criminal cases in municipal (city), state and federal courts. The specific court will depend on where the alleged crime happened and how serious it was.

For example, a speeding ticket can technically be considered a criminal case in many jurisdictions. Speeding tickets are often resolved in municipal courts. A serious felony in Georgia (assault, murder, etc.) is more likely to be brought in a county or state court. Federal courts can also hear criminal matters. Criminal cases heard in Federal court are generally cases brought by a U.S. attorney. Those cases involve violations of federal law.

Some argue that criminal law serves to punish those that break the law. Others believe it is there to deter others from participating in illegal conduct. Even so, what happens to the money raised from fines? Does that money go to the victim? Generally, the answer is no. In some circumstances a victim may see some compensation from a victim’s fund. Another example: a defendant ordered to give compensation to their victim as a condition of a sentence. The money from fines mainly gets directed back to the government or the court system. Crime victims don’t receive generally receive it.

Who is not familiar with the O.J. Simpson case? Even some law school professors use this case to explain the difference between criminal cases and civil cases. In 1994 O.J. Simpson (a former NFL star) was accused of murdering his ex-wife Nicole Brown Simpson and her friend Ron Goldman outside of Ms. Simpson’s Los Angeles home. The case made world headlines and resulted in a media frenzy that began during his famous police chase and ended with a not guilty verdict heard around the world.

However, the saga did not end there. The aforementioned criminal case against Mr. Simpson was followed by a wrongful death civil lawsuit against him, brought family members of Ms. Simpson and Mr. Goldman. In that case a civil jury ruled that Mr. Simpson was personally liable for the deaths of Mr. Goldman and Ms. Simpson. The civil case awarded a substantial amount of compensation to the plaintiffs. Such a jury award is money that Mr. Simpson would be responsible for paying as a result of the jury’s findings.

News of the 2nd trial caused significant confusion to those unaware of the ins and outs of the American legal system. How could one jury find O.J. not guilty and right after a 2nd jury find that he was responsible? Isn’t that double jeopardy? No, because Mr. Simpson’s first trial occurred in criminal court. Significant jail time is the punishment for murder convictions. In the civil trial the government was not a party to the case. The parties bringing the civil action were acting directly on behalf of the victims. They were seeking money damages. A civil jury cannot sentence a defendant to jail time in a civil case.

Criminal trials deal in guilt where civil trials deal in liability. Guilt and liability are not the same things. A criminal jury uses trial evidence to make a determination of innocence or guilt. A civil jury will use evidence to make a finding of civil liability. That means they must find whether a civil defendant is liable or not liable for damages complained of in the civil lawsuit. Civil and criminal law require different standards of proof.

A criminal jury will use a standard referred to as “beyond a reasonable doubt.” That topic could be an article in itself, but the takeaway is that a finding of reasonable doubt (doubt to which you can attach reason) should result in a finding of not guilty. The civil standard is “by a preponderance of the evidence.” That means is it more likely than not. The criminal system requires a presumption of innocence. A reasonable doubt standard is more difficult to meet than the preponderance standard. Civil defendants do not receive an initial presumption of “not liable”.

The O.J. civil and criminal cases both used a lot of the same evidence however the civil plaintiff’s attorneys met the preponderance standard when the criminal jury found reasonable doubt. That is why it is possible to have very different results in civil and criminal cases that stem from the same initial situation. This case draws a lot of passion! Many people believe the prosecution met their burden of proof. Regardless of where someone comes down on the case, it is still a good example of civil and criminal law at work.

Besides wrongful death cases, a common civil situation involving criminal law are injury cases involving a drunk or intoxicated driver. DUI accidents will not only invoke a criminal case against the drunk driver but many dui accidents are serious and result in injuries.

Prospective clients frequently ask our office about how to punish a DUI driver. They want them punished to the fullest extent of the law. And rightly so!

As civil lawyers, we frequently help hold DUI drivers accountable. Depending on the circumstances, we may encourage a client to have involvement with the criminal case linked to their Georgia civil cases. They may work with law enforcement and prosecutors to provide the information needed to prosecute and convict the drunk driver. Providing information to the police and prosecutors can have an impact on the case against the DUI driver. That does not guarantee that the victim will have significant involvement in the criminal case. Also, it does it guarantee a conviction. However, it provides the victim the opportunity to share their story. That can be helpful in their moving forward.

Civil injury attorneys cannot send DUI drivers to prison. However we can use all of our expertise and resources to hold them responsible under Georgia civil law. Civil law aims to compensate people for their damages. Compensation for DUI related injuries may include money for medical bills and lost wages. DUI victims may also be eligible for compensation for pain and suffering. In addition, Georgia civil cases involving DUI may also involve punitive damages. So technically in limited circumstances civil law can include an element to punish people for their unlawful conduct.

Civil cases and criminal cases are far more complicated than just the content discussed in this article on Georgia civil law. This information is not legal advice! Secondly, it does not substitute for a conversation with an experienced Georgia lawyer that can answer case specific questions. We encourage accident victims navigating criminal and civil issues to call our office for a free case evaluation.

At Scholle Law, we only handle cases involving injured people. We have over 25 years of experience representing clients in the state of Georgia. Every day we offer free consultations to see how we can be a resource for those in need of help.

Call Scholle Law today at (866) 592-1296 or contact us online to schedule your free consultation.