Help! What Should I Do After a Georgia Truck Accident? 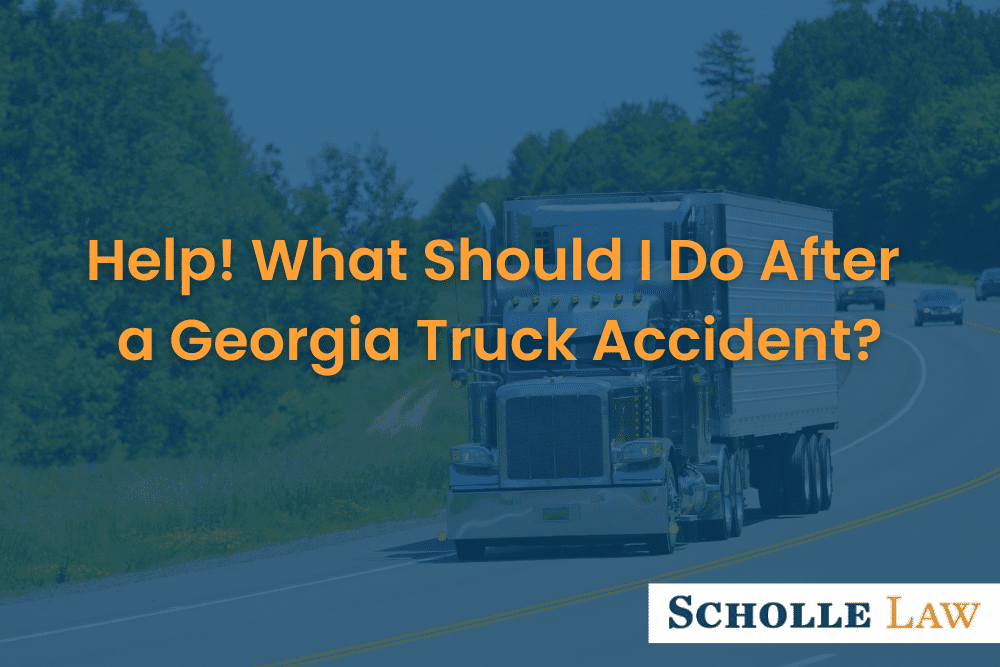 Right after a truck accident, it’s hard to think clearly. Even if you stay conscious, the shock and adrenaline may change your reaction or make it difficult to think of what to do next. But as you recover, there are a few things you can (and should) do to protect your legal rights and lay the groundwork for the best possible recovery.

First of all, make sure you get medical attention. That may sound obvious, but there is a lot to do after an accident. People who were not badly hurt may not think of going to the doctor while they are handling the aftermath of the crash. They also may not notice pains or changes in their bodies right away, thanks in part to the adrenaline rush of the accident itself. Some injuries are not obvious right away. As a result, victims may turn down medical attention at the scene, only to realize later that they are not feeling right.

We strongly recommend that you follow up with a doctor’s appointment as soon as possible. There are several reasons to see a doctor, even if you still feel fine. One is to be sure to let a professional make decisions about your medical needs. If you are injured, getting seen right away can also help you get on the road to recovery sooner.

In addition, seeing a doctor is important because it gives your insurance or legal claim the best possible start. Insurance companies make money by not paying claims. Delaying medical attention can give them the excuse they need to deny your claim, providing “evidence” that suggests you may be making up the injury or were hurt in another activity. Ultimately, this could result in losing financial compensation entirely or fighting an avoidable court battle to get it.

For similar reasons, you should make sure to notify your auto insurance company as soon as reasonably possible. This may not be the first thing you think of, especially if there was a serious injury. However, delaying filing an insurance claim can give your own insurer, or the truck driver’s insurer, a reason to doubt that the accident was serious. This can hurt your chance of collecting fair compensation for your injuries.

You should keep this report as factual as possible. Don’t offer your opinion or apologize because these can be taken as an admission of fault. The law enforcement officers who came to the scene, and probably wrote an accident report, are in a much better position to decide who was at fault.

If you are not sure yet about your medical diagnosis, you should avoid discussing this with the insurance company right away. You can make a report about the damage to your car or truck and other property right away, but wait up to 2 years to report your injuries. This is a good idea because doctors sometimes need weeks or months to accurately predict your medical needs. If you report an incorrect prognosis sooner, the insurance company may assume that you are lying if you change your story later.

Another very important thing to do after a wreck is to obtain the accident report and other paperwork. If law enforcement officers came to the scene of the crash, which is likely in serious accidents, they will have written an accident report.

That report is the main basis upon which insurance companies decide who was at fault, along with the drivers’ statements. Officers at the scene may have told you how to get a copy, but if not, you can get a copy from the Georgia Department of Transportation (GDOT). GDOT also offers motorists an opportunity to submit their own reports if law enforcement did not come to the scene of the crash.

You should also consider taking photos of the damage to your car and your body if you can. These probably are not memories you would like to keep, but the pictures could be important later if you need to prove the extent of your injuries to an insurance company or jury.

Finally, you should never talk to the trucking company or its insurance company. As we said, insurance companies make more profit when they deny claims. Sometimes, they will try to minimize what they owe through unethical tricks.

For example, they might offer accident victims a small amount of money right away for a quick settlement. What these companies will not say is that the law gives you only one chance to collect compensation from any one defendant. For that reason, taking the money could make you ineligible to claim any more compensation later, when doctors have had the time for a full diagnosis and prognosis.

Trucking company representatives might also ask you to make a recorded statement or sign papers, which could later be used to show that you “admitted fault,” even if that is not what you said. You might be tempted to agree because you want to set the record straight or feel that saying “no” is rude. But to protect your rights, it is best to avoid the trucking insurance company entirely. That is especially true if you think they are trying to pressure you. You have no legal obligation to talk to them, so you are free to politely turn them down.

If you hear from a trucking company or its insurance company right after a crash, you should consider telling them you are not ready to talk about it, or that you are still waiting to find out what doctors think of your injuries. Both of these are likely to be true within the first few weeks after a crash.

If you hire an attorney, they will handle the insurance companies for you. In fact, it is illegal for an insurance company to contact you directly if they know you have legal representation.