Can I File a Car Accident Lawsuit if I Was Not Wearing a Seatbelt? 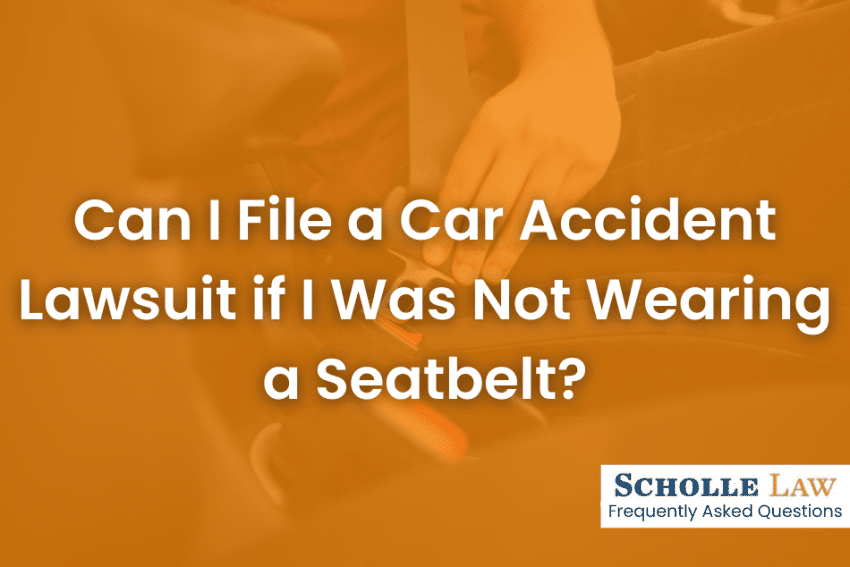 Children are required to wear a seat belt whenever they sit in the car’s front or rear seat. The rules aren’t nearly as clear-cut for adults.

If an adult is over the age of 17 and is sitting in a car’s front seat, the law requires him to wear a seat belt. If adults sit in the car’s back seat, they can ride with no seat belt.

In some instances, adults may not need to wear seat belts if they’re traveling in a pickup truck while doing farm work. Riders are also not responsible if an older vehicle lacks seat belts.

What if you’re an adult who works as a security guard or at a similar job? You may drive around all day with no seat belt on. You are constantly hopping in-and-out of your car. Since you never leave the parking lot, you rarely drive faster than 10 miles per hour.

If that’s the case, then you probably do not have to wear a seat belt. The law does not apply to people who are constantly getting in and out of their vehicles and driving at less than 15 miles an hour. Delivery drivers generally don’t need to wear seat belts either. Similar reasoning applies.

Driving in reverse may also exempt you from wearing a seat belt. You may need to twist your body to see where you’re going. A seat belt can restrict your range of motion. Ironically, the restriction of a seat belt could cause an accident.

There are many other situations when you can ride in a vehicle with no seat belt. A lawyer can explain whether seat belt laws apply to your case.

Your Lawyer Will Consider Unique Circumstances

What caused the car accident?

The cause of your accident will be key to your case. It is generally more important than whether or not you wore a seat belt.

There are four things your lawyer will need to prove:

The first step is the easiest. Usually, a police officer or witnesses will testify that your accident happened. Case closed.

The second step may be the most important of all. Georgia law requires that you prove that the defendant is to blame for at least 50% of the accident. This is the only way for you to recover financial damages.

Let’s explain how the court assigns percentages of fault.

Imagine there’s a multi-car pile-up on the highway. A red car rear-ends a second white car. The force of the accident pushes the white car straight into a third, blue car. The driver of the blue car had no seat belt on during the car accident.

But everything changes when the trial jury learns that the second driver had been tailgating. If they had been driving with more room between the cars, they might not have hit the blue car. The second driver is at least partially to blame for the accident.

The jury ultimately decides the first driver started the accident, so they are 60% responsible. The second driver holds 30% of the fault. The third driver was in violation for not wearing their seat belt but did nothing else wrong. They bear only 10% of the fault.

Someone can receive compensation so long as they are less than 50% responsible for an accident. The most liable party generally must pay those with less than 50% liability.

The Financial Impact of the No Seat Belt Law

You saw in that example that the blue car’s driver had no seat belt on. This wasn’t relevant when deciding who was to blame for the accident. This is true in real-world cases.

Georgia law states that lawyers can’t use a driver’s lack of a seat belt to suggest they are responsible for a car accident.

After the jury (or a judge) decides who was at fault, they must determine how much money the plaintiff should get. Seat belt-related considerations may become relevant at this time.

The plaintiff must prove that wearing a seat belt would not have lessened their injuries. Otherwise, wearing no seat belt could negatively impact their financial recovery.

A jury will decide whether wearing a seat belt could have prevented some, but not all, of the driver’s injuries.

The takeaway: Wearing no seat belt shouldn’t stop you from suing. However, it may impact the money that you receive. This possibility will depend on the facts of your case.

If you or a loved one was injured in an accident, hire a Georgia car accident attorney to represent you. At Scholle Law, we have a long track record of success. We’ve won millions of dollars for Georgia accident victims and their families.