The Concussion Symptoms from my Car Wreck Won’t Go Away. Do I Have a Traumatic Brain Injury? 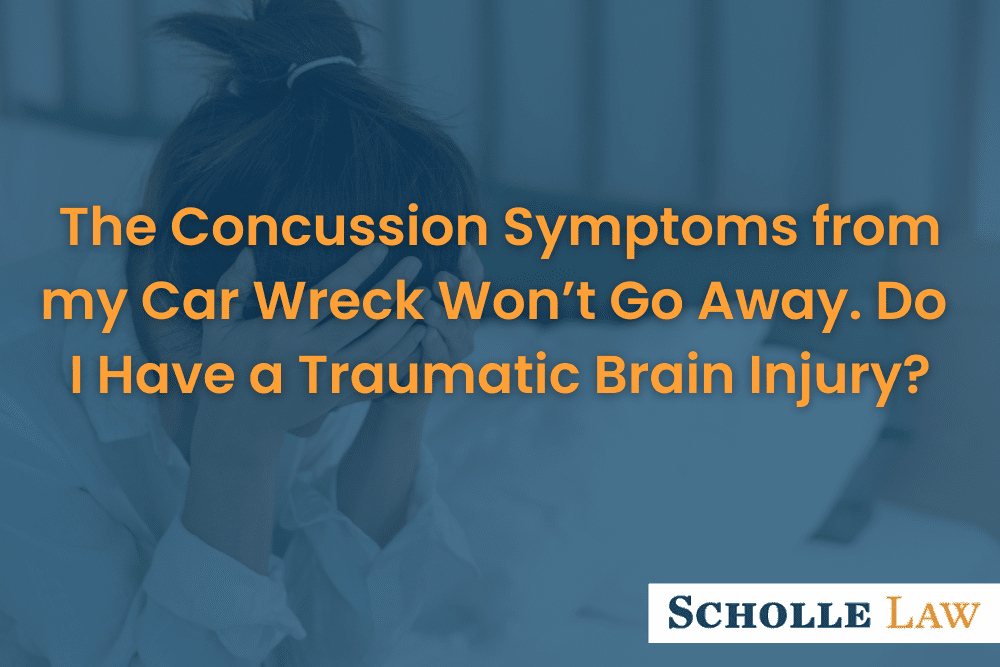 When most people think of the word “concussion,” they think of a minor head injury that can cause headaches that last a few days or weeks, with no permanent effects.  People think that a single concussion is not harmful, and only multiple concussions cause long-term damage, like those repeated head blows in sports like boxing and football.

New research indicates that this is not the case.  Concussions are serious injuries that can cause long-term permanent damage, even with only one occurrence.  When a car driver’s head hits the dashboard, headrest, airbag or another object, it causes the brain tissue to slosh around inside the skull.  Even a violent whiplash without any direct impact with an object can cause concussion damage.  Like any other soft tissue of the body exposed to trauma, the brain can respond by bruising (bleeding), tearing and swelling.

If someone is injured during a car wreck, and he or she goes to the emergency room, the ER doctors may evaluate for a concussion based on the complaints of the patient and whether the patient lost consciousness at any time.  Diagnostic tests at the ER would probably include a CT (Computed Tomography) scan or an MRI (Magnetic Resonance Imaging) scan that would look for a brain bleed.  ER doctors are generally evaluating for potentially fatal injuries.  They are not as concerned with non-fatal, non-emergency injuries.  Accordingly, if they don’t see a brain bleed, they usually simply discharge the patient with instructions advising the patient to rest after a concussion.  The patient returns home and rests.  Usually, the patient gets better.  However, what happens if the concussion symptoms don’t go away?

What happens if concussion symptoms get worse?

Headache, vomiting, nausea, depression, malaise, confusion, memory loss.  When these symptoms linger and get worse, it can be the sign of a traumatic brain injury more serious than a mild concussion.  According to a recent study at the NYU Medical School, a single concussive event can cause lasting permanent brain damage.  This is because the brain can lose volume and atrophy when the gray tissue is damaged from trauma.  This atrophy can be present years later and is considered permanent.  This means the symptoms described above can be permanent too, making the auto accident case much more serious than one visit to the ER might otherwise indicate.

Victims of TBI may not recognize their symptoms or the change in their brain function.  Family members may need to step in.  When the concussive symptoms persist or get worse, the patient should go to a neurologist who specializes in traumatic brain injury.  The neurologist or neuro-radiologist can perform clinical diagnostic tests that can distinguish a traumatic injury from organic causes.  Once the source of the problem is identified, then a treatment plan can be developed.  This may include therapy and cognitive treatment from a psychologist or neuro-psychologist.  A neuro-psychologist can evaluate a patient for cognitive function and future impairment.

An auto accident lawyer who specializes in brain injury is essential to secure the medical evidence from the treating doctors.  Traumatic brain injury lawyers know what to expect from skeptical insurance companies.  Symptoms which may be considered mild to skeptics looking from the outside can be devastating to the victim and his or her family members.  Loss of ability to work, to function, to continue relationships, or to emotionally cope are all damages that seem subtle to the outside observer, but which are really life-altering to those affected.  It is the lawyer’s job to fully illustrate the reality of these effects.  A lawyer who does not specialize in TBI cases could miss the nuances of a brain injury case, which could lead to a terrible legal outcome for the victim and his or her family, who have already gone through so much.

We have over two decades experience in representing TBI victims from auto and truck wrecks.  We provide free case evaluations and case reviews and would love to meet with you if you or a family member are struggling with a TBI.  Please call us at 770-717-5100 if you have any questions regarding your situation.