All About Georgia’s Sovereign Immunity Law

What is Georgia’s Sovereign Immunity Law?

In Georgia, the ability to bring a lawsuit against a government office or one of its employees is limited, and some instances entirely prohibited because of the Georgia Sovereign Immunity Law. This is known as “immunity.” 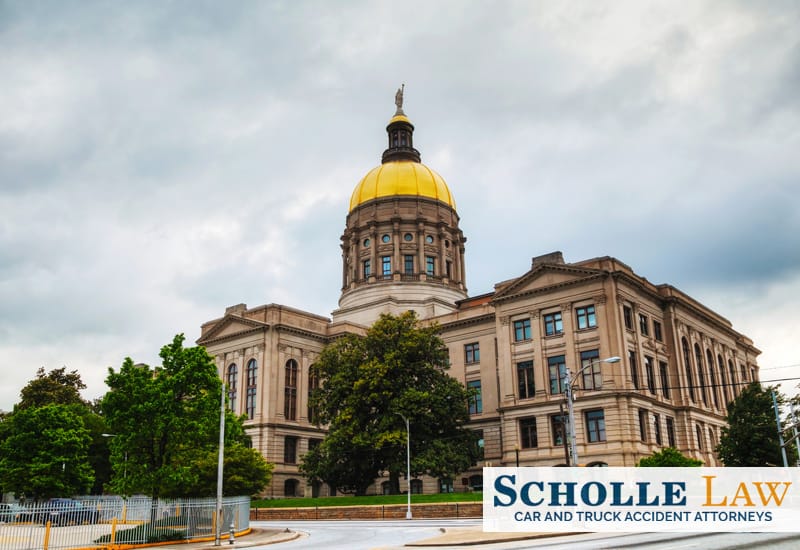 It is important to know that the burden of proving a waiver of immunity in any particular case rests with the person seeking damages against the state office or employee—as was determined by the landmark case Cosby v. Lewis, 308 Ga. App. 668 (2011).

In short, personal injury and accident lawsuits against the government are highly complex, involving much more nuanced areas of law. For this reason, you should consult with an experienced Georgia injury attorney at Scholle Law right away if you are seeking a claim against a potentially immune government employee or entity.

One way to conceptualize the concept of immunity is to imagine each governmental office or employee with their own invisible shield or cloak that insulates them from claims and lawsuits. Some shields offer more protection than others. Whether you may pierce this legal shield is often a function of the law and whether the government has “waived” its immunity. If so, the case or cause of action may proceed under the law.

If not, it may be dead on arrival.

The Law is Written into the State Constitution.

Governmental entities, meaning the offices and departments of the government, have long enjoyed immunity. This protection has its roots in English common law that originated hundreds of years ago and was adopted by Georgia in our State Constitution. (See Article I, Section II, Paragraph IX)

Essentially, this constitutional doctrine prohibits the Georgia courts from hearing lawsuits against the state of Georgia without its express consent.

Georgia’s Constitution provides a mechanism for this consent, by way of the Georgia legislature, providing that it may waive Georgia’s sovereign immunity law from suit by passing a State Tort Claims Act. The legislature has, in fact, passed such an act that sets forth the procedure for bringing actions and claims against the state, its departments, agencies, officers, and employees. (See O.C.G.A. §§ 50-21-20 to 50-21-37)

Pursuant to the Constitution, the Georgia legislature is also authorized to establish monetary limits on such claims and suits—and in fact has done so in the past, setting forth a $1 million limit of individual recovery from any single occurrence and an aggregate limit of $3 million per occurrence regardless of the number of claimants. (See O.C.G.A. § 50-21-29)

Immunity is Also Protected by the Courts.

The Georgia Supreme Court has summarized these immunity concepts as follows:

The Legislature Has Power to Waive Immunity.

As previously mentioned, the legislature holds the keys to any waiver of immunity. So while the Georgia Constitution provides that the legislature may waive immunity for any of its officers or employees of the state, its departments or its agencies (to include those employed by counties, municipalities, school districts, hospital authorities, other local authorities, any state departments, commissions, boards, divisions, instrumentalities and institutions) the legislature has not yet done so—at least fully.

Rather, the state of Georgia, pursuant to the Georgia Tort Claims Act, has waived immunity in a much narrower sense and only as to claims against “the State of Georgia and any of its offices, agencies, authorities, departments, commissions, boards, divisions, instrumentalities, and institutions,” but not as to claims against “counties, municipalities, school districts, other units of local government, hospital authorities, or housing and other local authorities.”

Further, liability of such entities and employees is limited in the degree to that of any private business or person under the same circumstances. (See O.C.G.A. § 50-21-23(a))

Of particular note, the Georgia Tort Claims Act does not waive immunity for school districts. However, the legislature has provided separate statutory authority for waivers. This authority rests in the individual school districts and is left to each districts’ discretion.

A common claim against school districts arises in the context of school bus accidents. School districts are required to purchase insurance for the benefit of children riding in school buses. Such policies must protect against injury or death resulting from an accident or collision involving a school bus.

However, the amount of such insurance is within the discretion of each individual school board, according to O.C.G.A. § 20-2-1090 which says:

The various school boards of the counties, cities, and independent school systems employing school buses are authorized and required to cause policies of insurance to be issued insuring the school children riding therein to and from school against bodily injury or death at any time resulting from an accident or collision in which such buses are involved. The amount of such insurance shall be within the discretion of the respective boards.

And, it may come as a surprise to learn that some school boards in Georgia have elected to purchase policies with bare-bones coverage—as little as $5,000 per child of coverage for medical and funeral expenses.

As for other motorists and individuals injured in school bus wrecks, school boards in Georgia are authorized to purchase policies of insurance for their benefit, but there is no requirement to do so as O.C.G.A. § 20-2-1092 clearly lays out:

The various school boards are authorized to cause a provision to be inserted in policies issued under Code Section 20-2-1090 insuring the members of the general public against personal injury or death or damage to property resulting from the negligent operation of the school buses. Nothing, however, in this part shall be construed as imposing legal liability upon such boards on account of such accidents. Wherever an insurance company issues a policy containing such a provision, the company shall be estopped to deny its liability thereunder on account of the nonliability of the school board.

Despite this fact, most school boards in Georgia have indeed secured such policies.

Some, however, have not.

This is troubling news because it means that some car wreck victims may be left with little or no financial recourse to compensate them for any injuries suffered in the wreck beyond their own uninsured/underinsured motorist policy.

Final takeaway: Can you sue the government?

So, for anyone who suffers some injury at the hands of a governmental entity through the actions of one of its employees, the final analysis is two-fold.

First, it must be determined if the State has waived immunity for that particular governmental office, department, or agency with the  Georgia Sovereign Immunity Law. If so, the inquiry doesn’t end there. It must then be determined whether the governmental employee(s) who caused the harm is immune from suit.

Again, to determine if a governmental employee is immune from suit, we must look at their acts and determine if they were performing duties that were discretionary or ministerial. This, of course, is a very fact-specific inquiry.

To determine if an employee was exercising a “discretionary” duty, look to see if they were exercising their decision-making authority towards some sort of legitimate governmental policy or purpose (hence, the term “discretionary” as it means just that—that the employee is exercising discretion). This would be in contrast to a government employee who is performing specific duties aimed at accomplishing a finite and very specific task.

Here are a few examples:

Contrast these examples with an employee who is exercising their discretion as to when and whether a street should be opened, closed or repaired, when a sewer should be built, or when a government employee is exercising a discretionary function of their duties and will be immune from suit. (Joyce v. Van Arsdale, 196 Ga.App. 95 (1982))

However, when performing the actual work of opening, closing, repairing or building, government employees are performing their ministerial duties. But the distinction illustrated here may, in some situations, be blurred.

One such example is where a government office has no specific policy or procedure for certain job-related functions. For instance, take the situation where a county has no policy for leveling its road shoulders and makes an affirmative decision to not repair or level its road shoulders despite an inspection showing road shoulder deficiency. Here, the decision to do nothing was not viewed as discretionary, but rather ministerial. (Stone v. Taylor, 233 Ga.App. 506 (1998))

By way of further example, say that the county road department requires its employees to record all complaints by county citizens pertaining to the county roadways. The duty of recording those complaints is an example of a ministerial function. However, the decision to implement this policy in the first place is an example of a discretionary function. (See Wanless v. Tatum, 244 Ga.App. 882 (2000))

Also, consider the situation with a chemistry lab class and whether a teacher should have required that all students don their protective eyewear. And, further suppose that a policy exists that unequivocally requires this under situations involving the use of “caustic or explosive materials.” Then, during a chemistry experiment, a student who is not wearing any protective eyewear suffers eye-damaging burns.

Given the policy that all students must wear eye protective gear when dealing with caustic or explosive materials, one might think that the teacher’s deviation from this seemingly clear policy was an example of them exercising their ministerial duties and their failure in that regard.

However, that may not always be the case.

The terms “caustic” and “explosive” may be subject to interpretation and therefore placing that decision in the arena of a discretionary function. In fact, the Georgia Supreme Court has held as much, overruling the Georgia Court of Appeals on this very distinction. (See Grammens v. Dollar, 287 Ga. 618 (2010))

But again, it is not enough that a government employee is found to be performing a ministerial task to be found liable for the injury. It must also be proven that they performed that task in some negligent manner.

To determine whether this is so, one might look first to the policies and procedures of that specific office as applied to that specific employee and that task.

For instance, a government office tasked with repairing a sewer line may have manuals, rules, checklists or other guidelines that must be followed during such repairs. If the employee(s) deviated from that guidance without proper authority or some other legitimate reason, that will almost always serve as evidence of negligence.

The same may be true of a road crew team that may have failed to set up warning signs pursuant to their own office’s instructions. As you can imagine, such a failure could amount to catastrophic consequences.

Liability is limited in degree to that of any private business or person under the same circumstances. And, whether you can pierce the shield of immunity in the first place involves a very fact-specific inquiry and careful analysis of the law.

So, if you find yourself in a situation where you suffered harm or injury at the hands of a government office and its employees, we urge you to immediately contact one of our experienced Georgia personal injury lawyers at Scholle Law to discuss your unique situation and whether you can pursue a claim or suit for your injuries and the full measure of your damages.