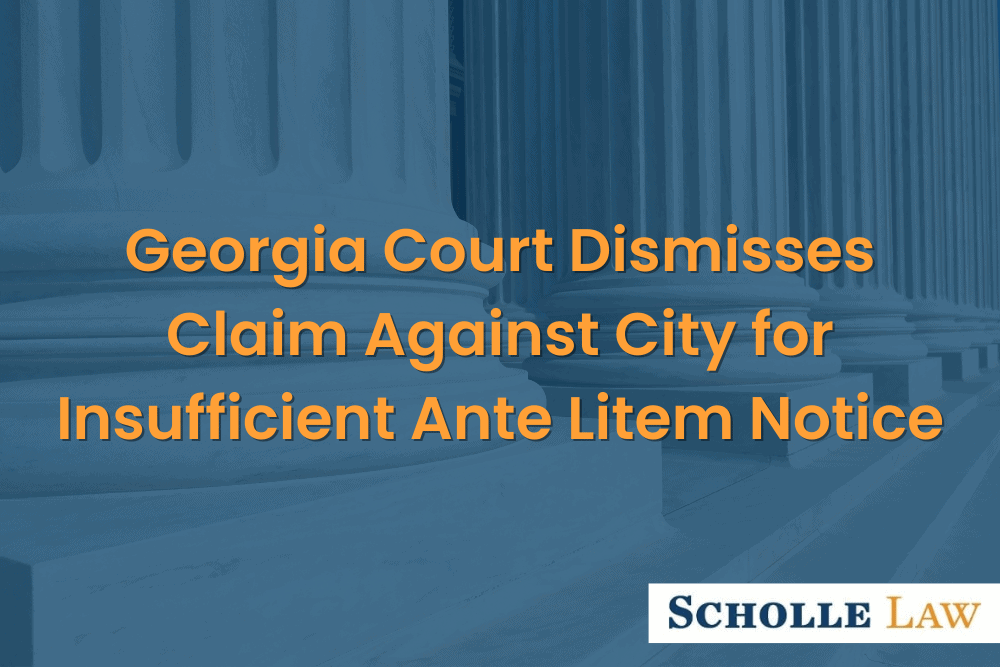 While it is not impossible, recovering compensation for personal injuries from a municipality or government entity is often a complicated and involved process. For example, if you are involved in a car accident with a municipal employee, in addition to the procedural requirements that navigate the pursuit of damages in a standard car accident case, there are additional ante litem, or pre-lawsuit, notice requirements under Georgia law.

A failure to provide the proper notice can be fatal to a claim, as was recently illustrated in a case arising out of the Court of Appeals of Georgia. If you suffered injuries in a car accident with a municipal employee, you should meet with a skilled Georgia car accident attorney to discuss the facts of your case and whether you may be able to seek compensation.

At the time of the accident, Georgia Code Section 36-33-5 required that any party who wishes to pursue damages against a municipal corporation, also known as a city, provide the city with ante litem notice of the claim within six months of the date of the accident that allegedly caused the injury. The notice needed to set forth the date and place where the injury occurred and must describe both the injury and the negligence that allegedly caused the injury. At the time of plaintiff’s injury, no other information was required to be included in the notice. The statute was modified two months after the accident, however, to include the requirement that any injured party must also set forth the specific amount of monetary compensation he or she is seeking, and that the failure to do so would constitute an offer of compromise.

On appeal, the plaintiff argued that her claim should not have been dismissed, because substantial compliance was all that was required under the ante litem notice law. The court was not persuaded by this requirement, finding that the plaintiff’s notice was insufficient even under that standard, as it did not include any specific amount of damages.

Further, the plaintiff argued that the modification to the ante litem notice law should not have been applied retroactively. The court noted that while laws are usually not retrospectively applied, they can be when the legislature intends them to apply retroactively. Here, the court clarified that as the amendment only discussed the information that must be in the notice, the amendment was not meant to apply to notice required for any tort that occurred after the date of the amendment, but was to apply to any notices issued after that date, regardless of when the injury occurred. Therefore, the court found the trial court properly dismissed the plaintiff’s claim.

If you were involved in a car accident with a municipal employee, it is essential to retain an attorney with the knowledge and experience needed to assist you with your pursuit of damages. The seasoned car accident attorneys of Scholle Law are well-versed in the requirements of pursuing claims against cities and municipalities and will work diligently to help you seek compensation. Contact us at 770-717-5100to schedule a free and confidential meeting.

Georgia Court Clarifies When Plaintiff Has Duty to Preserve Evidence